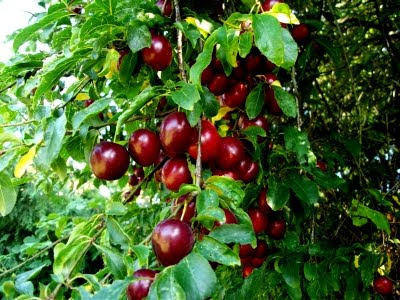 The tree at the bottom of the garden has been groaning under the weight of its fruit this year. Its an ancient tree, already full grown when we moved to the house 40 years ago. Now I've alway thought these were small plums because of the way they grow on the tree, but they also taste like cherries. However it doesn't really matter either way, whatever they are I still have the problem of picking, using and preserving them before they go over. The wasps are already eyeing them up and the birds are feasting on the ones I can't reach - so nature will have its share. 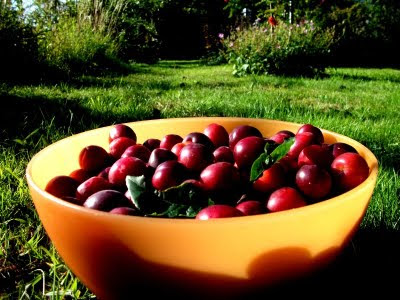 We've eaten probably too many than are good for us fresh, I've made crumble puddings, frozen some, given lots away, and my latest effort has been bottling. I've not tried this form of preserving before and I don't think I've been completely successful as at the end of the session there has been so much syrup left I feel I must have done something wrong. 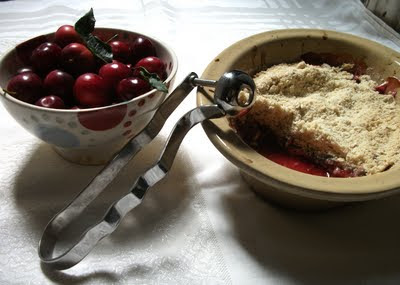 But we tried them today as one jar's seal had failed and needed to be used first. I'm pleased to report they were delicious with some greek yogurt - so my sister will get a jar when she visits on Friday. Of course I have to pretty up the jar and decided this was the perfect opportunity to use my Lunchbox Note die (for the first time!). Inside the note I've written serving suggestions copied from the book. And yes, you've guessed it, the recipe came from Sensational Preserves by Hilaire Walden. Where would I be without this wonderful book! 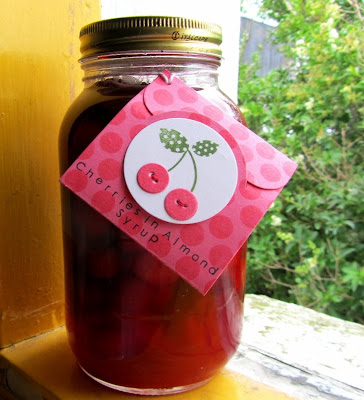