I've squirrelled it away.... 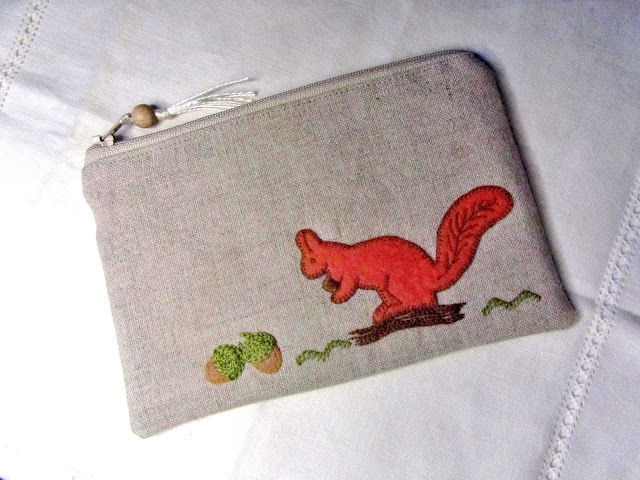 I finished a little gift for my friend to give her friend. Apparently they have a squirrel thing going on between them so I hope they both like it. I like making zip purses - they are so useful for storing bits and bobs. This one is big enough for pens and pencils. 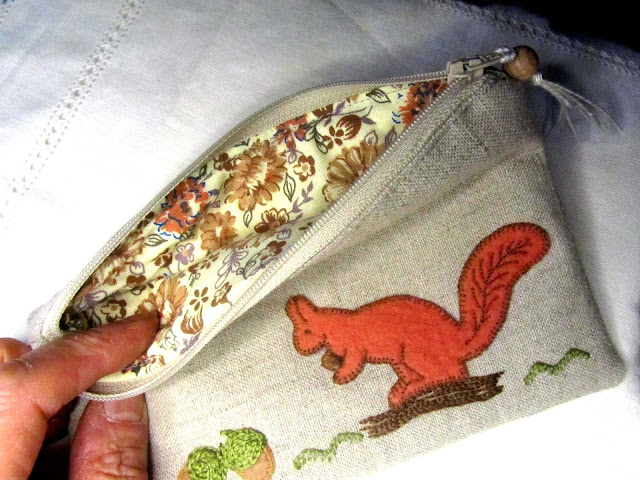 I found the squirrel design in an old Dryad Press leaflet entitled Embroidered Dresses for Children. Its written by one of my very favourite embroiderers Priscilla Mary Warner and features five sweet little girls' dresses decorated with embroidered motifs 1950s style. This gingham pinafore is my favourite. Sadly I fear no little girl would submit to wearing such an outfit nowadays. 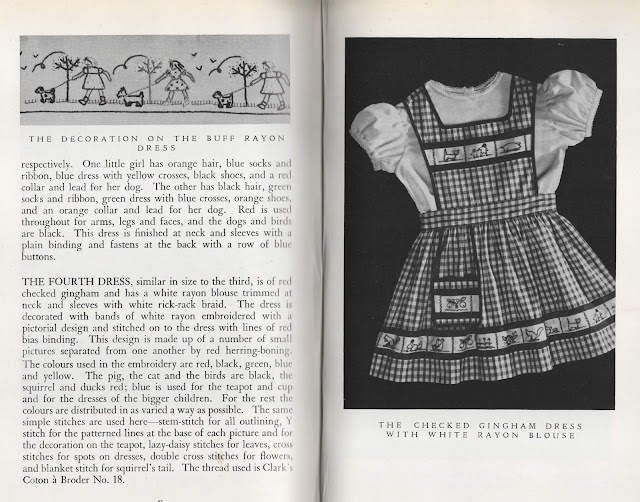 And if you read my last post, you might like to see the finished autumn leaf panel. I really enjoyed working it. A quick and easy project that encouraged me to carry on with another gift using embroidery - a small pram/car seat quilt. Already started it!! :o) 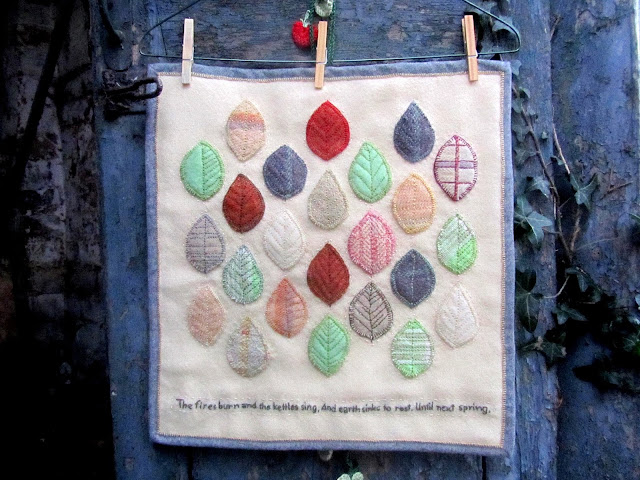 Photographed on yet another dull and grey day - even outdoors doesn't produce a particularly good image at the moment!  But we do have the occasional sunny day, for example last Friday was beautiful! I sneaked off by myself to walk on the beach. 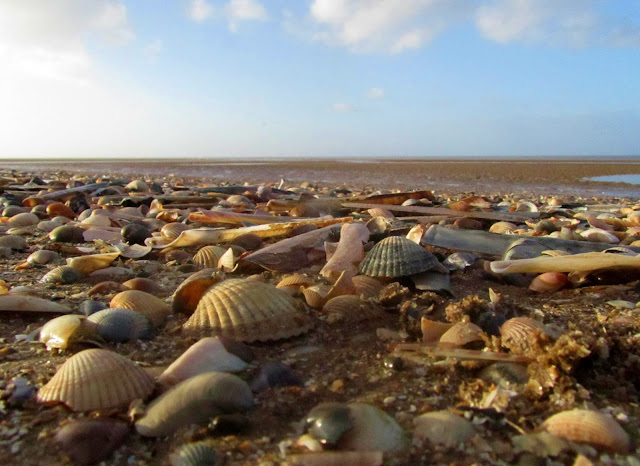 Hmm, a shell embroidery is floating around in my head - perhaps nearer the summer!
Posted by Ann at 15:28 4 comments: Links to this post

Colour for a Grey January 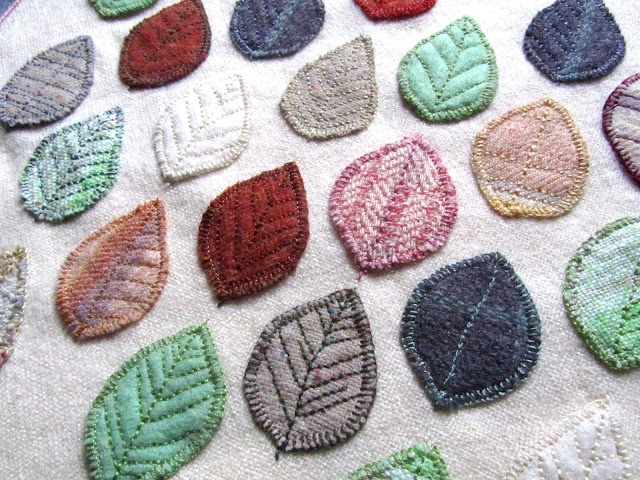 Here we are half way through January already and not a project finished! However I have finished the first stage of my first stitching for the first month. I don't know about you but I've always thought of the months of the year in colour form and this year January is definitely grey. However I wanted something more colourful to start the year and decided on an Autumn theme (and why not!). And that meant I could use the pieces of old (mainly Welsh) wool blankets I've been collecting. 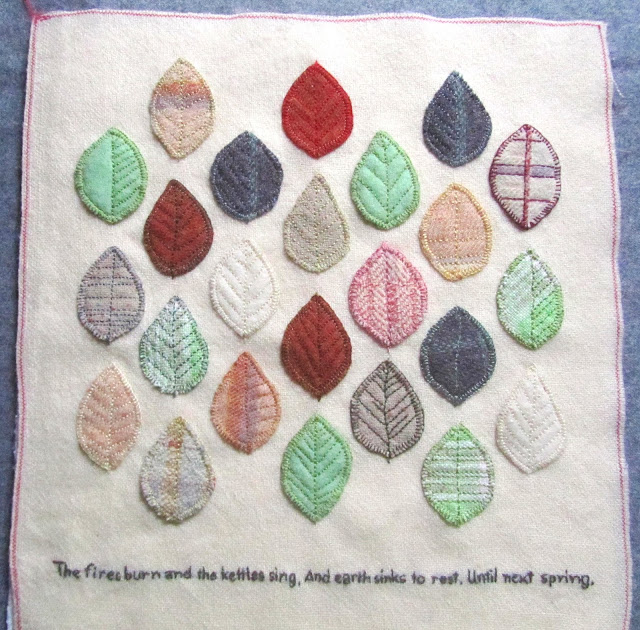 Its quite a simple design - simple shapes and easy basic embroidery stitches. I haven't decided on the finished product yet.... could be cushion, lap blanket, wall hanging, but I won't be putting it behind glass as I love the raised texture of the appliqued leaves. 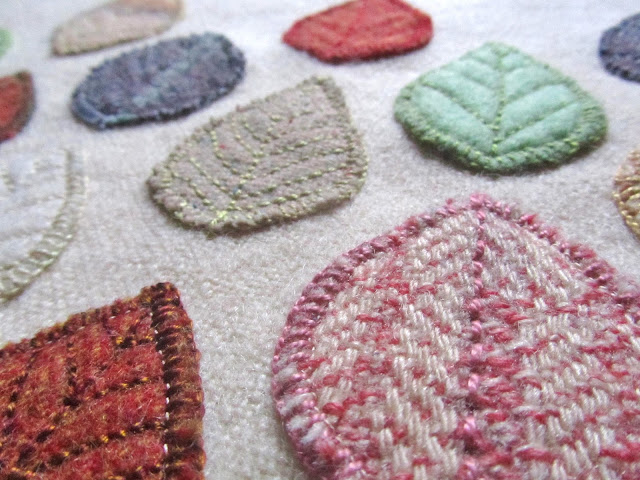 The next step is backing and I think there will be simple quilting. I'm adding a layer of cotton batting between the blanket and grey flannel backing. 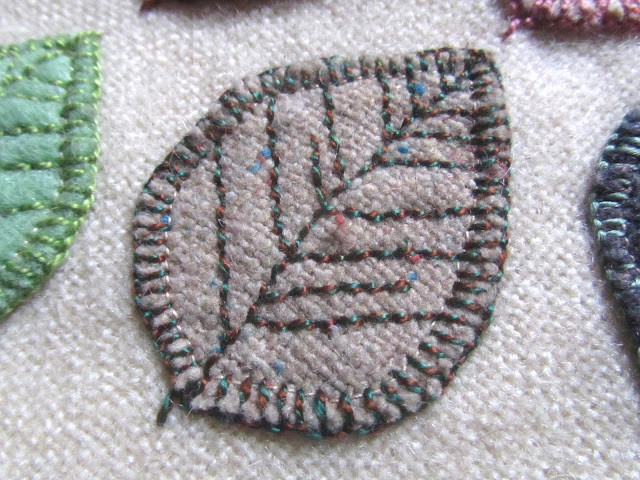 I used vintage threads to embroider too. Some are labelled for crochet, some knitting silk, and some for embroidery. I like that all the materials I've used, except the batting, are reused/recycled. 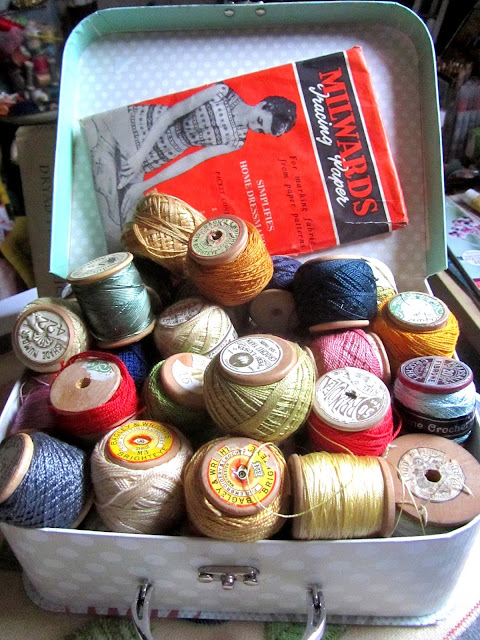 I've already got two more projects planned - both using embroidery in some way. A friend has asked for a gift for her friend featuring a squirrel and there is a new baby on the horizon to stitch for. I'd like 2016 to be my year of embroidery but we'll see how it goes.

Love to know what your New Year projects are.... and perhaps see a photo or two when completed!
Posted by Ann at 15:18 6 comments: Links to this post 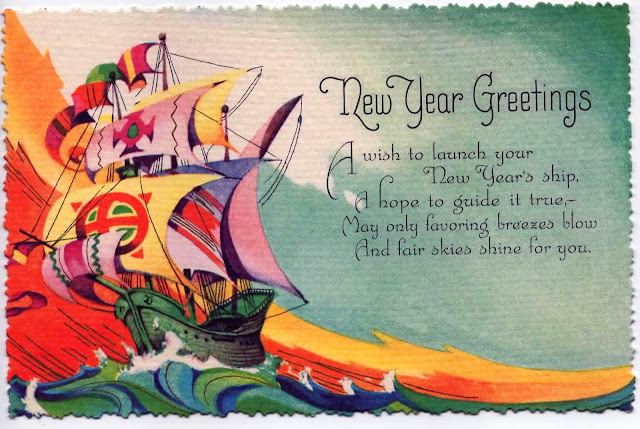 Here's another old card I picked up along the way somewhere. Galleons are often seen on greeting cards of the 30s and 40s and I never could understand their significance but this New Year message says it all I think. So Happy New Year to us all and I hope 2016 will bring a peaceful end to at least some of the world's troubles - sadly I doubt it!

But to all us crafty types we can at least hope for a creative year ahead and perhaps a new string to our bows! Not sure what mine will be yet..... so much to choose from.
Posted by Ann at 12:12 4 comments: Links to this post