May Your Weeds Be Wildflowers

I'm spending a lot of time at my Mum's house at the moment and like to have small stitching projects with me while I'm there to keep my hands busy when we watch TV or sit on the front porch with a cup of tea.  I made this needlecase last week - perfect for portable project making.  The pattern is a fabulous freebie from Australian creative genius Bronwyn Hayes at Red Brolly. 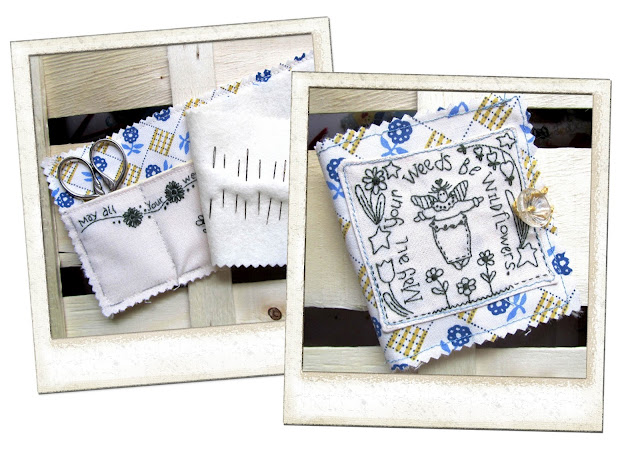 Bronwyn's blog is such a colourful and happy place to visit and no matter what your homemaking or crafting obsession is you will find something to love and inspire there. 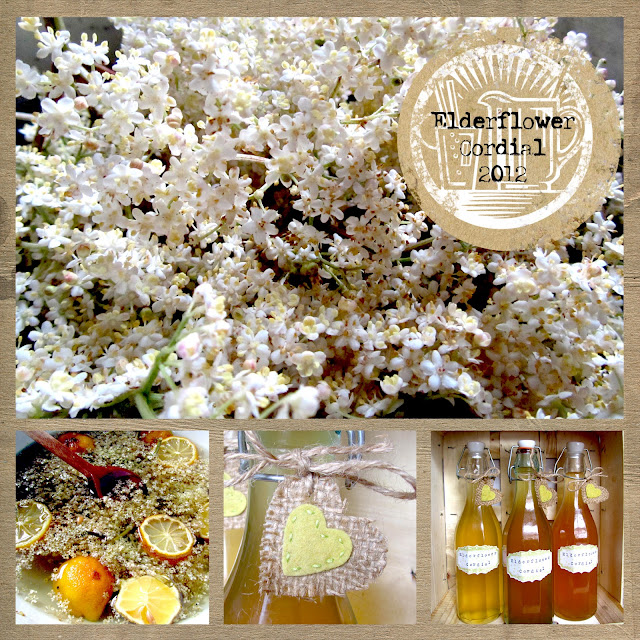 Its time for the first garden harvest of the year - Elderflowers. This cordial is my absolute favourite summer drink and is so unbelieveably quick, cheap and easy to make (recipe here) I can't understand why its so expensive to buy.  I made a bit more of an effort with the presentation this year and created some stamped labels and hessian tags to decorate my preserving bottles.  I ironed some fusible interfacing onto a piece of sacking (I get sacks for free from our local pet shop) and die cut some hearts, added some felt and threaded them onto garden twine.
Posted by Ann at 10:37 7 comments: 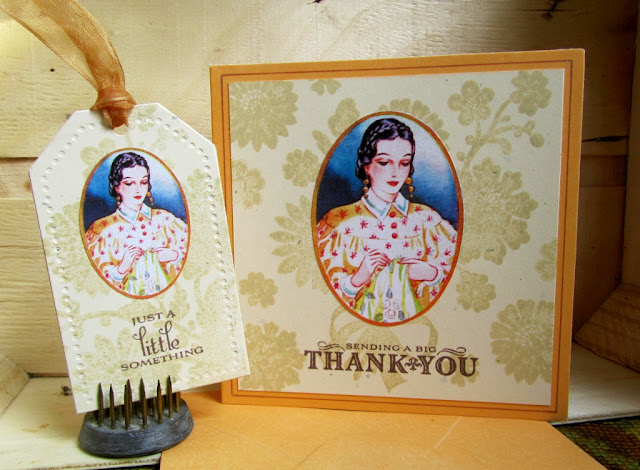 I've been collecting vintage homecraft magazines for a long time now and recently discovered a new to me title, Good Needlework.  Published in the 1930s, the pages contain many illustrations suitable for use on greetings cards - especially cards for those who like the old fashioned or vintage style. 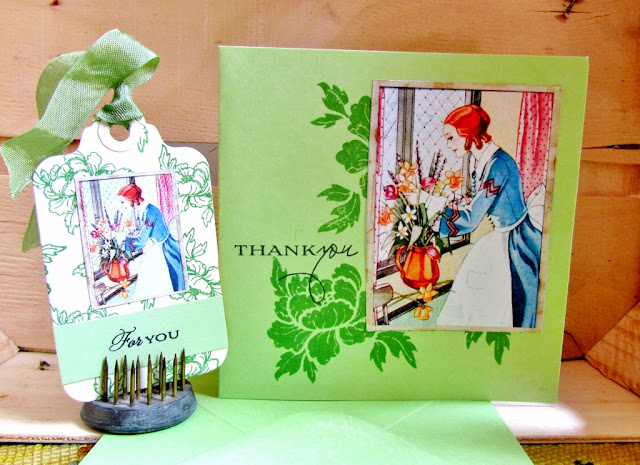 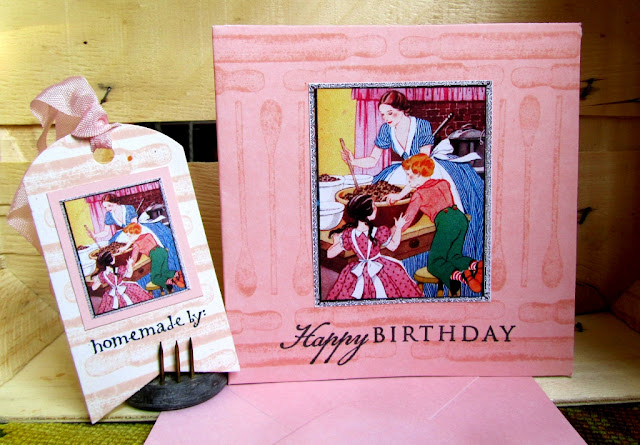 I scanned these pretty cover images, manipulated and resized them, then printed and cut them out to fit on my cards.  Of course I had to add a little suitable stamping too. 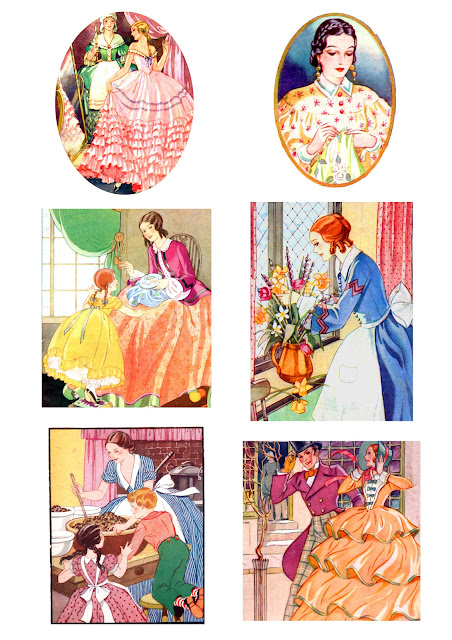 I've put some of the images on an A4 sheet so that anyone can use them -  they are long out of copyright.  Right click on the image and then click on 'open in a new tab'.  You can then enlarge and save the page to your computer and either print or use digitally.  If you have any problem downloading let me know and I can email you a PDF.  I'd love to see if anyone does make anything with them.
Posted by Ann at 02:09 6 comments: 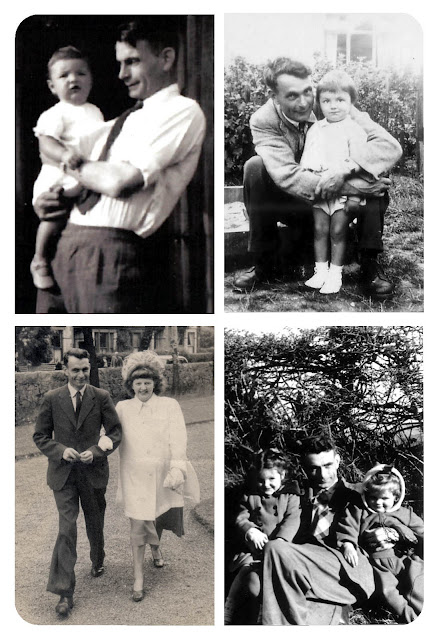 Father
He never made a fortune, or a noise
In the world where men are seeking after fame;
But he had a healthy brood of girls and boys
Who loved the very ground on which he trod.
They thought him just little short of God;
Oh you should have heard the way they said his name –
‘Father.’


There seemed to be a loving little prayer
In their voices, even when they called him ‘Dad.’
Though the man was never heard of anywhere,
As a hero, yet somehow understood
He was doing well his part and making good;
And you knew it, by the way his children had
Of saying ‘Father.’


He gave them neither eminence nor wealth,
But he gave them blood untainted with a vice,
And opulence of undiluted health.
He was honest, and unpurchable and kind;
He was clean in heart, and body, and in mind.
So he made them heirs to riches without price –
This father.


Now I think of all achievements ‘tis the least
To perpetuate the species; it is done
By the insect and the serpent, and the beast.
But the man who keeps his body, and his thought,
Worth bestowing on an offspring love-begot,
Then the highest earthly glory he was won,
When in pride a grown-up daughter or a son
Says ‘That’s Father.’

I love this poem by Ella Wheeler Wilcox, especially the first verse.  It makes me smile as I well remember us saying "Oh Father!" whenever Dad said or did something silly - and he often did!  When we would ask him what he wanted for Fathers Day, birthdays, or Christmas he always replied "peace and quiet".  As the father of four girls he probably meant it!  We'll all be thinking of him today. 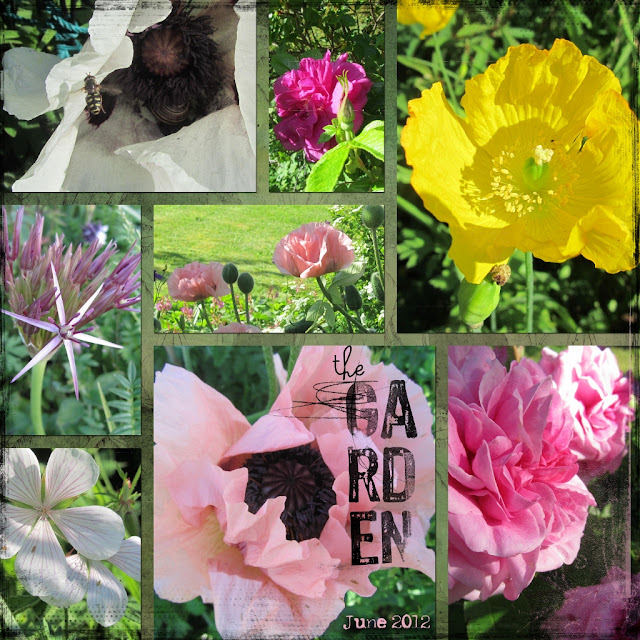 Contrary to popular belief, it IS summer and once in a while the sun shines.  But no matter the weather Mother Nature carries on regardless.  These photos were taken last week before the storms and even though these beauties took a real battering in the wind and rain the plants are still flowering on valiantly!
Posted by Ann at 03:25 5 comments: 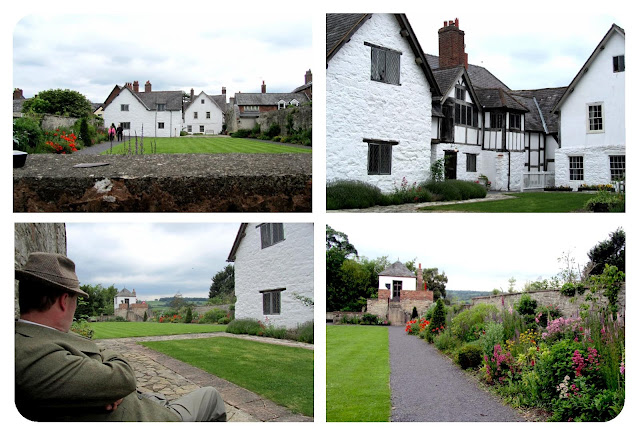 There wasn't much going on here over the holiday weekend - it seems everyone stayed home to watch television.  On Tuesday there was a Food & Drink Fair at Ruthin Castle however so as its just a short walk from my house we went along.  On the way back I wanted to called in at Nantclwyd y Dre as I knew the garden had been restored since I last visited.  The house and gardens date back to the 1400s and after years of standing empty and falling into disrepair it has been bought for the town by the local council.  Inside the house has been restored and completely transformed - each room recreating a different period in its history. 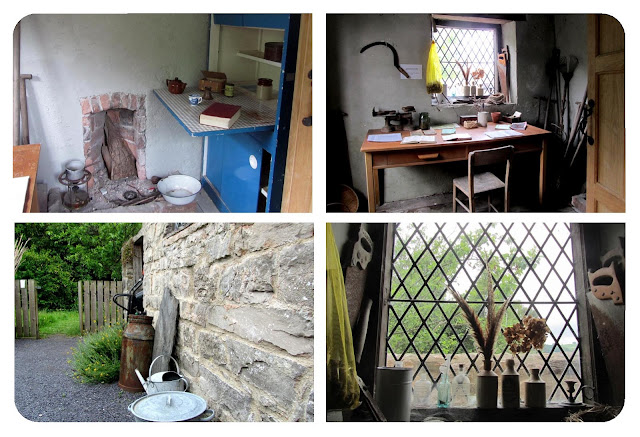 The garden is still a work in progress but I was delighted to find the two storey gardenhouse, which had been completely derelict the last time I saw it, has been brought back to life and turned into the gardeners' bothy.  There was practically no one around so we had the place almost to ourselves and I was able to snap away with my camera without getting visitors from the 21st century in the frame! 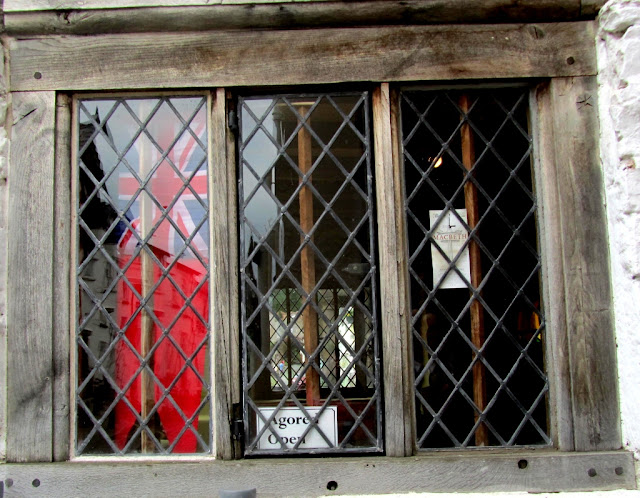 And speaking of frames, my very talented and good friend Godelieve very kindly let me use her four photo template here.  Thank you Godelieve!
Posted by Ann at 03:28 3 comments: 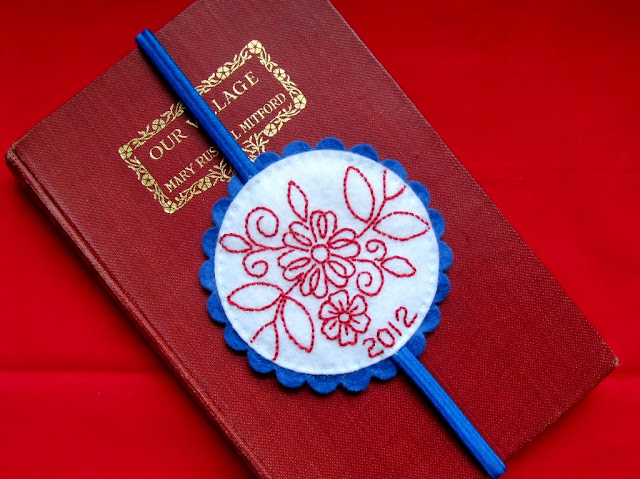 It seems almost the whole of London was covered in a sea of red, white and blue over the Jubilee weekend and as its my Mum's 88th birthday tomorrow, she's a great reader, and she's an ardent admirer of The Queen, I thought I would mark the Jubilee for her with this bookmark.  I was inspired by Susan's wonderful Strawberry Patch project last week where she had transformed a stamped image into an embroidery with the aid of a super-duper sewing machine.  My project is a bit more low tech however, but if I win the lottery one of those machines will be high on my shopping list!  I stamped onto a die-cut felt circle and hand embroidered in simple backstitch over the image.  Then I backed the embroidery with a larger blue felt circle and sandwiched the hairband between with a bit of acrylic stuffing to pad it out.  I found the Bev's excellent tutorial for the bookmark at Flamingo Toes. 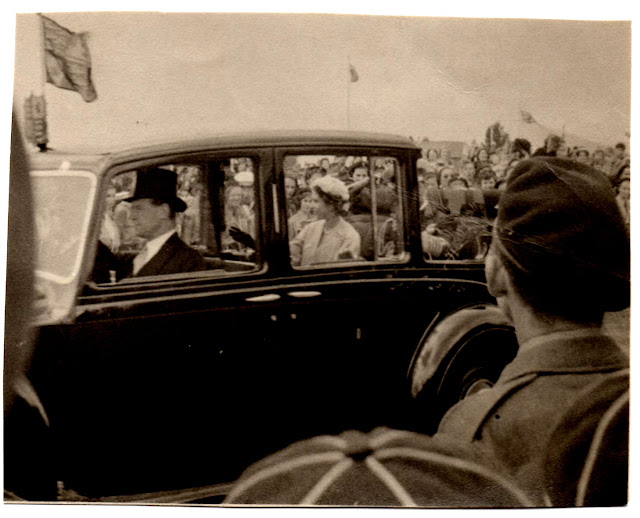 I do remember 2 June 1953 - vaguely.  I was 5 years old and I remember a flickering screen in a darkened room where friends and neighbours of my parents were gathered.  Like many other families we acquired our first television set for the occasion.  My Mum said she was not impressed when Dad brought the set home.  She said "why would I want to watch that - I won't have the time!"  But my sister and I loved Watch With Mother - Andy Pandy, The Flowerpot Men, and all the other puppets.

As well as the Coronation, 1953 was the year the National Eisteddfod came to Rhyl.  Dad was involved with the preparations on The Maes (the field) as he worked for the electricity board MANWEB.  I found this photo amongst his negatives - its The Queen arriving at the Eisteddfod.  She was on her Coronation Tour of Wales.  I remember her car was to drive past our house and we all stood in the front garden to wave. 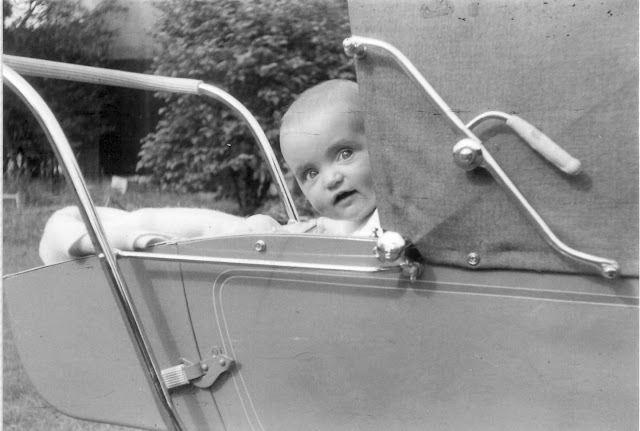 Our family had another celebration in 1953 - it was the year we became five instead of four.  My sister Elizabeth Jane was born in December.

If you are celebrating this weekend I hope the sun shines for you.  I'm sure we'll be watching The Queen on television at some time over the next few days - just like we did 60 years ago.  Oh, and Mum did eventually change her mind about the TV! 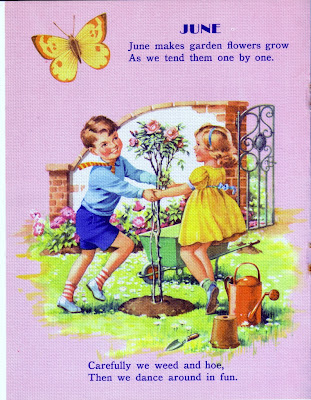 I missed out posting my vintage children for June yesterday so here they are - hmmm..... not sure about that rhyme!