A Long Walk on a Cold Night! 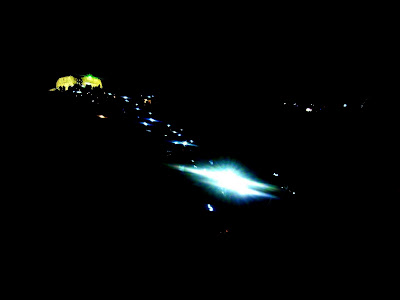 Along with a couple of thousand other walkers we joined in the Jubilee Tower 200 celebrations here last Sunday night. Music and drumming, laser lights into the sky, a lantern lit procession and fabulous fireworks were enjoyed by all, and the hot drinks and food much appreciated after a long cold walk in the dark. In my photo you can see the tower lit up and the lighted lanterns of the many walkers, young and old, on their way down the mountain. 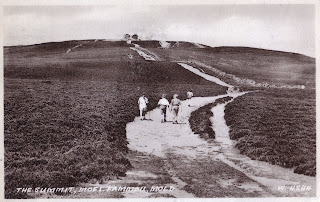 Moel Famau has been the background to our family lives since we moved here in 1958 and the tower, (or "the fort" as we've always called it) is situated on its highest point. Built to celebrate King George III’s Golden Jubilee, the foundation stone was laid exactly 200 years ago on 25th October 1810 and it was reported that on that occasion too up to 5000 people trekked to the top of Moel Famau to watch. The tower was completed some time after 1815 but a storm in 1862 destroyed the high Egyptian-style tower. It was never rebuilt but the base has remained and those that reach it today are 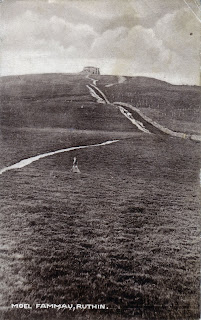 rewarded by fabulous views to the coast, Snowdonia, Liverpool and beyond, and even Blackpool tower can be seen on a clear day.

These three old postcards from my collection show the same scene unchanged over the past 100 years - and probably unchanged since that stormy night in 1862. 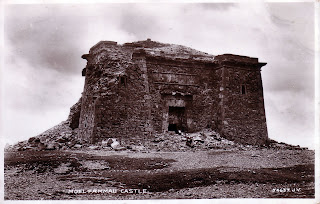 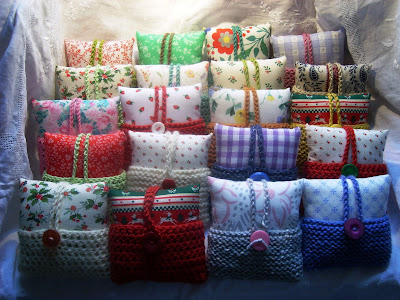 One or two people have asked if there is a pattern for my scented sachets and I thought I should write the instructions here - but really they just couldn't be easier! 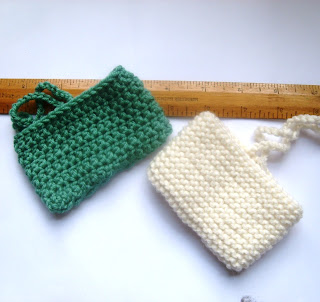 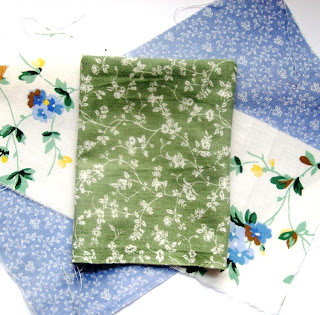 I start with a knitted or crochet pocket - the knitted ones are 40 stitches and 24 rows garter stitch. Cast off but don't tie off the last stitch and use a crochet hook to elongate it into a chain about 7" long. Slip stitch the end of the chain into that last stitch to form the fastening cord. Join the back seam and close the bottom using the same yarn and a tapestry needle. The crochet pockets are 37 chain for the foundation row, work a treble (double crochet in the US) into the third chain from hook and then one treble (double) crochet into each chain, joining into a round when you get to the end, being careful not to twist the ring - ask me how I know this! Work about 6 rounds double crochet and in the same way work a chain from the last stitch for the fastening cord. Use up all your odd balls of yarn - double knitting (I think its called worsted in the US) works best for me and size 4mm knitting needles or crochet hook. 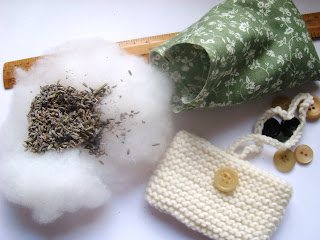 Make a pocket about 4" square from some pretty fabric. Depending on the size of my fabric scrap I either cut two squares or a strip with the fold at the top of the sachet. Leave the base of the square open for stuffing. I use toy stuffing and a handful of lavender/spices/rose petals. Enclosing the filling in the stuffing keeps the sachets nice and soft with no sharp poky bits coming through. Close the bottom seam - I find hand sewing the easiest and neatest method but machine stitching would be faster I suppose. Finish off by sewing a matching button to the front of the pocket and hooking the chain loop over the button from the back. See - EASY! 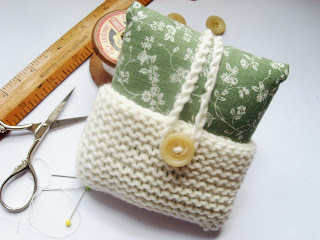 I've also had a request for the little girl peeling apples image I used on my autumn bookmark. She's an image from one of my Dover copyright-free books so I think its in order for me to reproduce her here for sharing. Click on the image to open then right click to save to your computer. Enjoy! 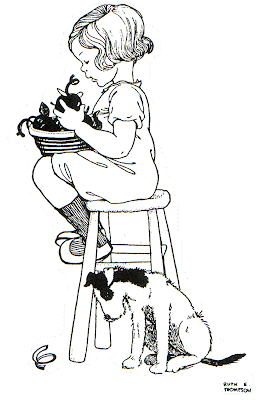 PS: Just read my blog friend Yuki's lovely comment! If you can't knit or crochet what about cutting up an old knitted jumper for the pocket and using ribbon or twine for the fastening. Might try it myself to see how it comes out.
Posted by Ann at 20:00 13 comments: 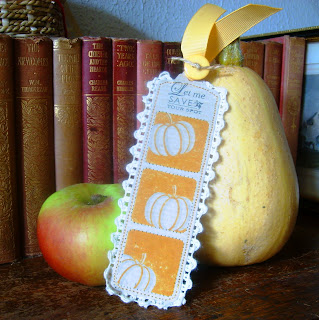 I like making bookmarks with the Papertrey die and lately I've tried using my Copics and old-fashioned copyright-free images as well as stamps to decorate them. Here are two Autumn style versions and as the latest A Passion for Papertrey challenge is Autumn - hooray! The pumpkins are from Take Three Autumn and the sentiment on the back is from All Booked up. 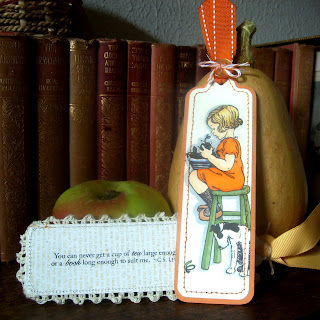 I find a single layer of cardstock isn't really sturdy enough so I always use two bookmarks back to back - and this gives the opportunity to sandwich something between the two layers, which I then stitch together on my machine.

Sorry for showing off my first Butternut Squash from the garden - we might have it for supper.
Posted by Ann at 21:08 11 comments: 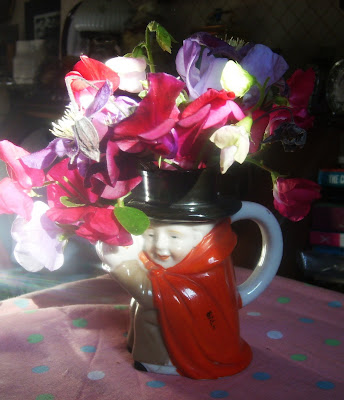 Ok I'm a bit late but I've only just found Apron Thrift Girl's excellent blog and I've been wanting to show off the little Welsh Lady Toby Jug I found in my charity shop a couple of weeks ago. Yes, I know she's a bit strange - toby jugs usually are - but I really like her, especially as she has (or had) "A Present from Bala" printed on her red cloak and Bala is where my Grandmother's family hail from. Unfortunately the printing is almost worn away and is only just decipherable. She looked really pretty holding the last of my sweetpeas.
Posted by Ann at 21:57 3 comments: 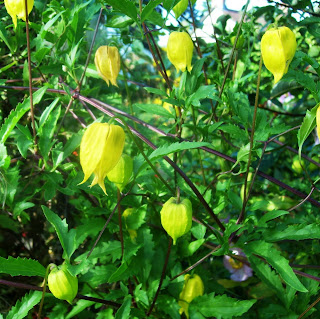 There's still plenty to photograph in the garden in October - berries, late flowers and ripening fruit and veg - so I'm still out snapping when the sun shines - and it has shone recently even though the last couple of days have been dull and misty. 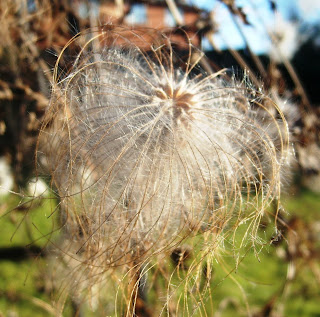 My lovely Clematis "Bill Mackenzie" has been absolutely covered in those pale yellow bells since early June. And you certainly get value for money with this plant as the seedheads are perfectly beautiful; in the beginning they look like a silky tassle and later turn into a feathery star. 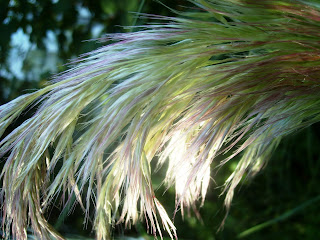 My Mum hates the two huge Pampas Grass plants behind the house. I have to admit they are untidy and dangerous plants for most of the year - their leaves are like bread knives, making them very difficult to cut back. My Dad used to burn them when the leaves were turning brown but I'd be scared to try this as I'm sure I'd set the house on fire! 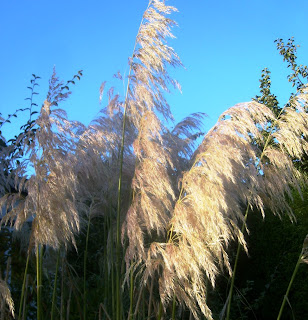 But when they start to flower in September you can forgive them anything. I love those tall translucent plumes - especially when the sun is low and they light up like lanterns. 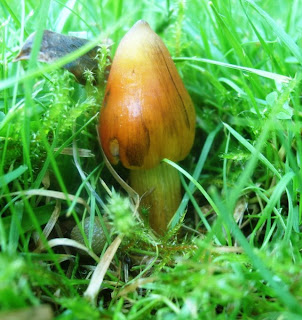 Another fascination for me is the crop of tiny toadstools in front grass platt at this time of year. Definitely homes for fairies! 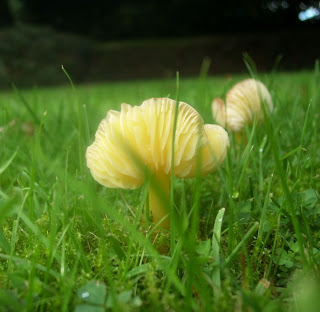 In the veg patch I've a beautiful Globe Artichoke plant but I'm afraid I never eat them - there are only one or two Globes each year and I tend to leave them on the plant and use them as decorations for the house once they've dried out - they look really pretty at Christmas sprayed with gold. But there is still much to harvest - I can't keep up with the Runner Beans, especially as no one else in the family wants them and its down to my son and I to eat as many as we can while they are small and stringless. I've harvested the Potatoes, Carrots and Apples and put them away for the winter - I tried the short and round varieties of carrot this year and they've been more successful - but still some have been attacked by the dreaded carrot root fly - horrible thing! In the next few weeks I'll be hoping to enjoy my first Butternut Squashes too - something I've not tried growing before.

Well that's the garden diary up to date! I've had a hard time keeping up with my blogging friends this week as I've been so busy with a new job and an order for some crafty items, so I must apologise profusely for my lack of commenting - hopefully I'll get back into my blog hop routine next week.
Posted by Ann at 16:15 9 comments: 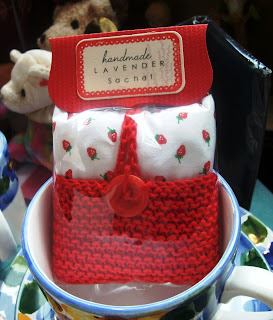 I really enjoy making these little lavender sachets for my local charity shop - its been a nice way to turn some of the yarn and fabric remnants I've accumulated over the years into funds for a good cause. And as the festive season is on the horizon, last week I thought I'd make some Christmas Spice versions, with crushed cloves and cinnamon sticks replacing the lavender. 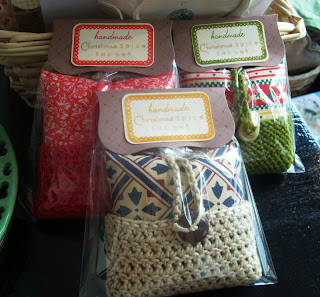 Being quite pleased with them myself, you can imagine how excited I was to receive an email from a lady who had bought one and asking if I could make some for her small shop. Don't you love it when someone likes what you've made. I almost feel like I've won a prize or had a promotion! But I'll be busy, busy, busy over the next few weeks as I've also landed myself a little part-time job, and what with my voluntary commitments too, it will almost seem like I'm back in full time employment! 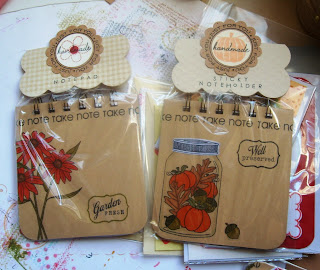 My little note books have also sold quite well recently so I made a few more with an Autumn theme using my lovely Papertrey Friendship Jar stamps. And what do you think to these Halloween gift tags - I thought they would be ideal to turn inexpensive sweets into Halloween 'trick or treat' ammunition easily and cheaply. We don't go overboard on Halloween here in the UK but its nice to give any small members of the family a little something on the night. 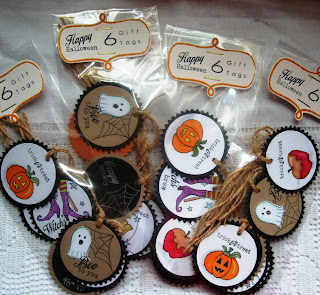