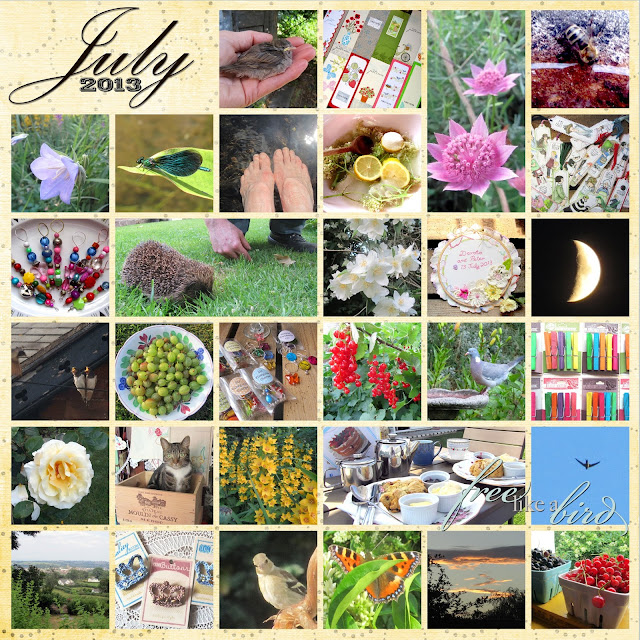 July gone already!  I really like how my digital photo reviews give a flavour of the month that's just passed by.  It seems in July I created a lot, didn't do enough in the garden and didn't travel far from home! :)  As always, if you'd like a closer look right click on the image and open in a new tab.  Then you can enlarge to see each little photo up close. 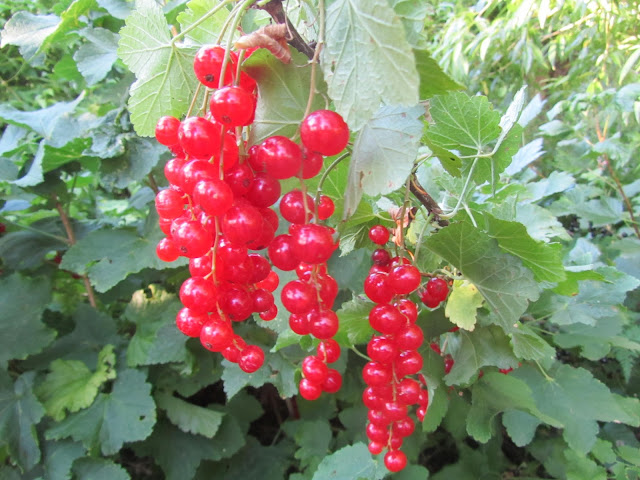 The next week or so will be about getting my red and blackcurrants gathered in and turned into something for the freezer or store cupboard (if I had one!).  They are so beautiful on the bush I always take lots of photos. 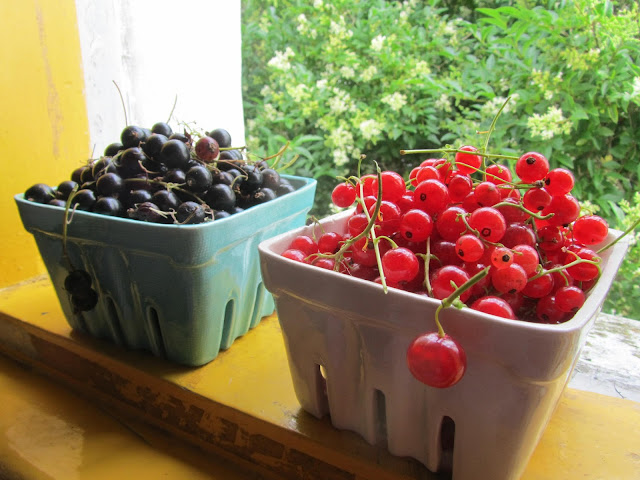 I've just one redcurrant bush so they are no problem, but I've about six blackcurrant bushes!  I think I'm going to try cordial this year as well as jam as there is a large crop.  I like Sue's redcurrant cordial recipe at The Quince Tree.  Its nice and straight forward and I like her way of simplifying recipes by adding in her own experiences in the kitchen.  Another new blog to follow! 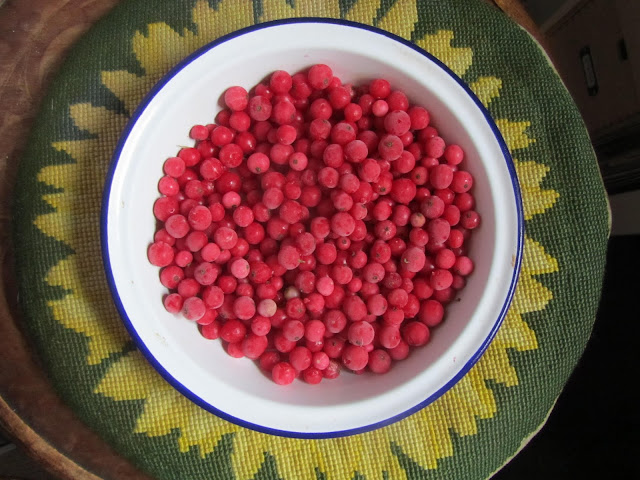 I'm in the process of redcurrant jelly at the moment but I open froze some of the crop to use later in fruit crumbles - my son's favourite pudding.  When I got them out to bag up this morning they were so gorgeous - just like frosted red beads.  I wanted to thread them into a necklace.... but I don't think they'd last long and my neck would get sticky!!!
Posted by Ann at 11:52 3 comments: 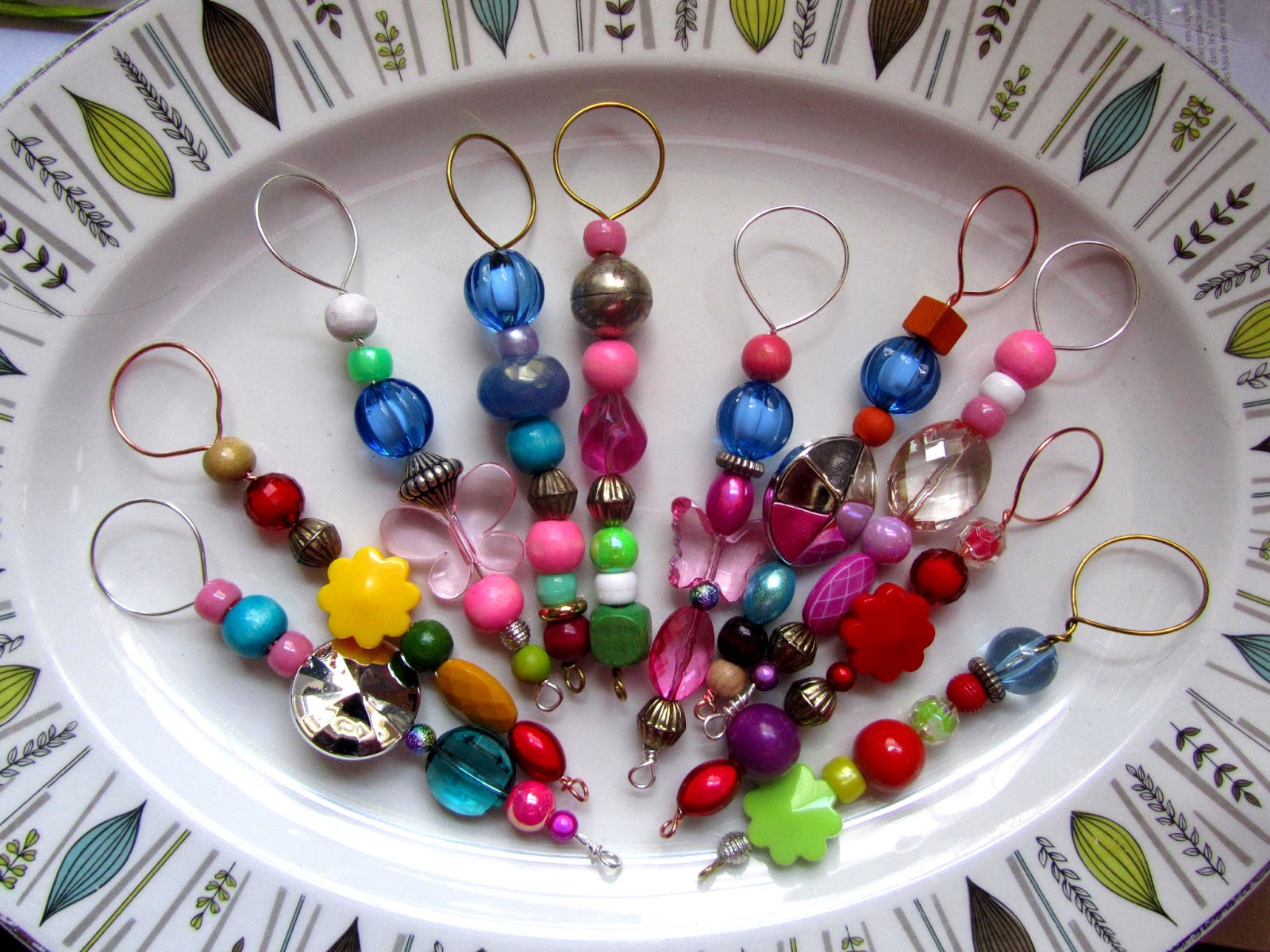 I made these bubble wands after seeing Lady Lucente's photo here.  I think mine are rather smaller as I wanted them to fit into the bottles of bubble mixture I'm using, and they are not as beautiful as the originals as I wanted to use beads I already had to hand.  To be honest they don't work as well as the plastic wands that come with the mixture - but they are much prettier! 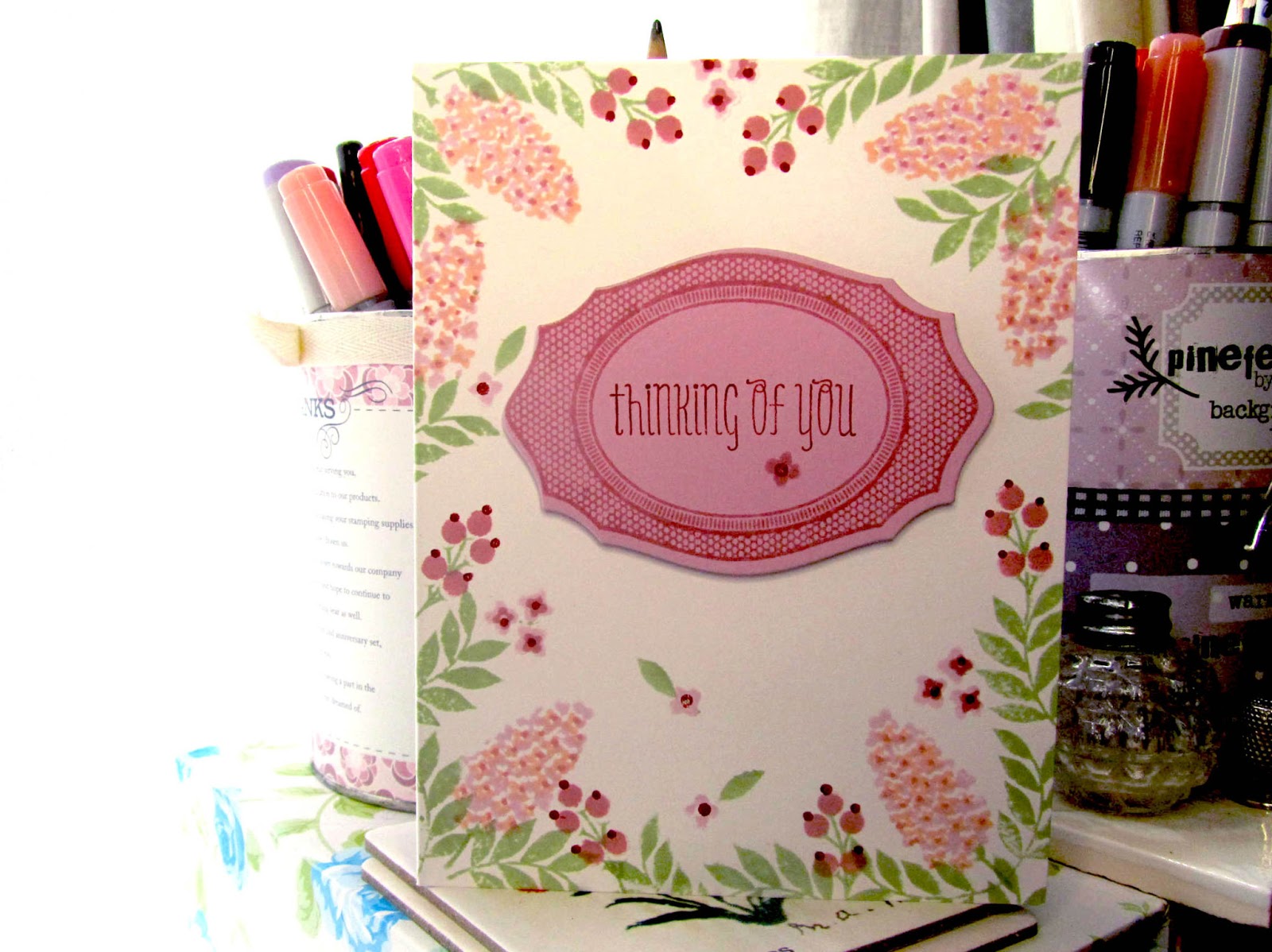 And great excitement today when the postman dropped of my new Fresh Cut Florals stamp set from Wplus9.  I've waited rather a long time for it to arrive and wanted to get it inked as soon as possible.  I made a card for a friend who is not too well at the moment and posted it almost before the ink was dry as I want it to arrive tomorrow.  The result is a rather poor photo as the light was not good, but I really enjoyed my first play with those lovely layered flowers.
Posted by Ann at 18:13 1 comment: 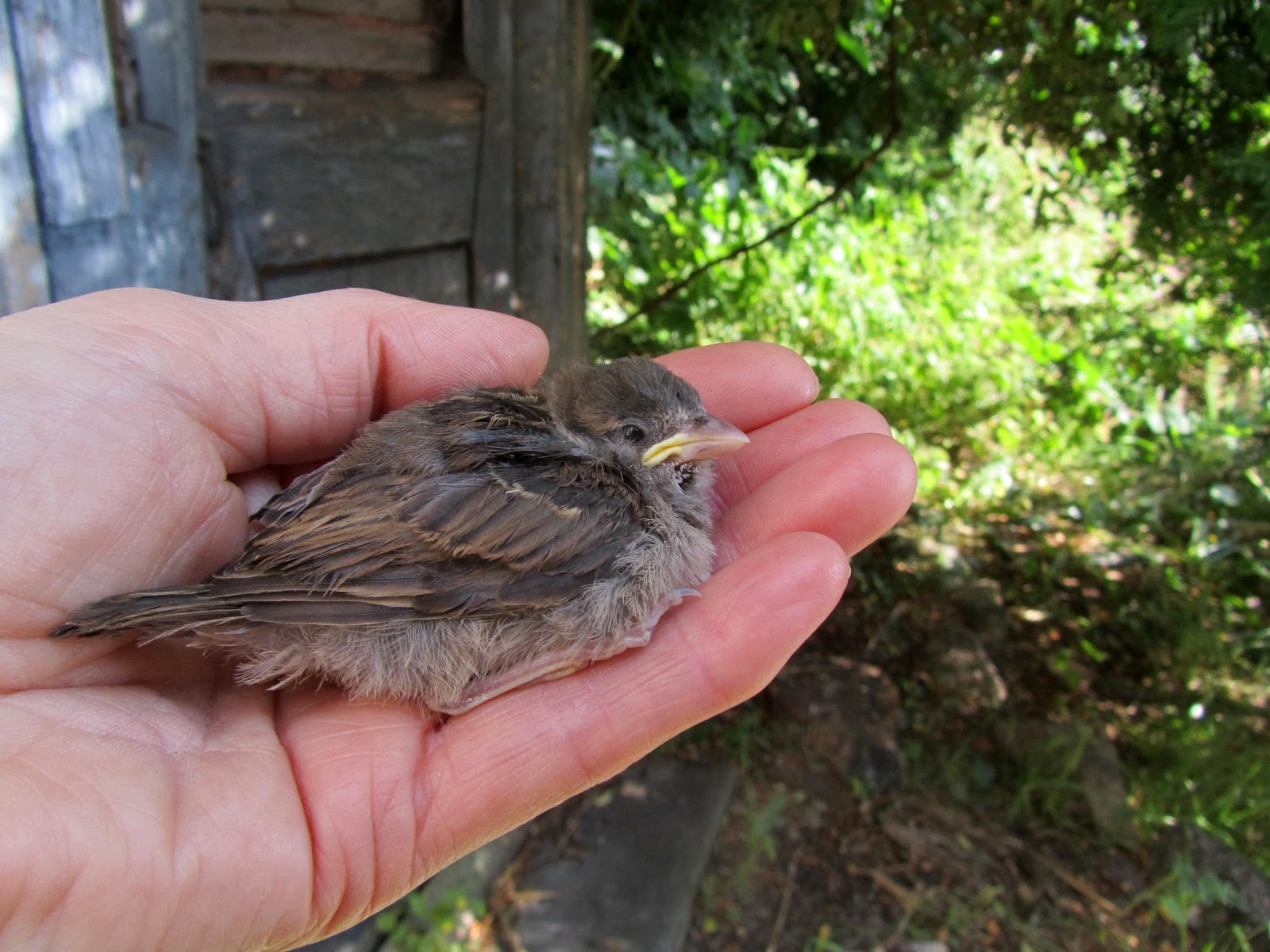 I knew it had to happen but my heart sank when my young cat Titch brought in her first bird the other day.  Luckily I was on hand to rescue it and Titch did not seem to know what to do next anyway.  The little sparrow didn't seem to be physically injured and after a rest on my hand (with Titch locked away upstairs) it calmed down and I put it on top of the coalshed in the shade.  I could hear it's anxious parent in the hedge so I left it alone and when I went back to look some time later it had gone. 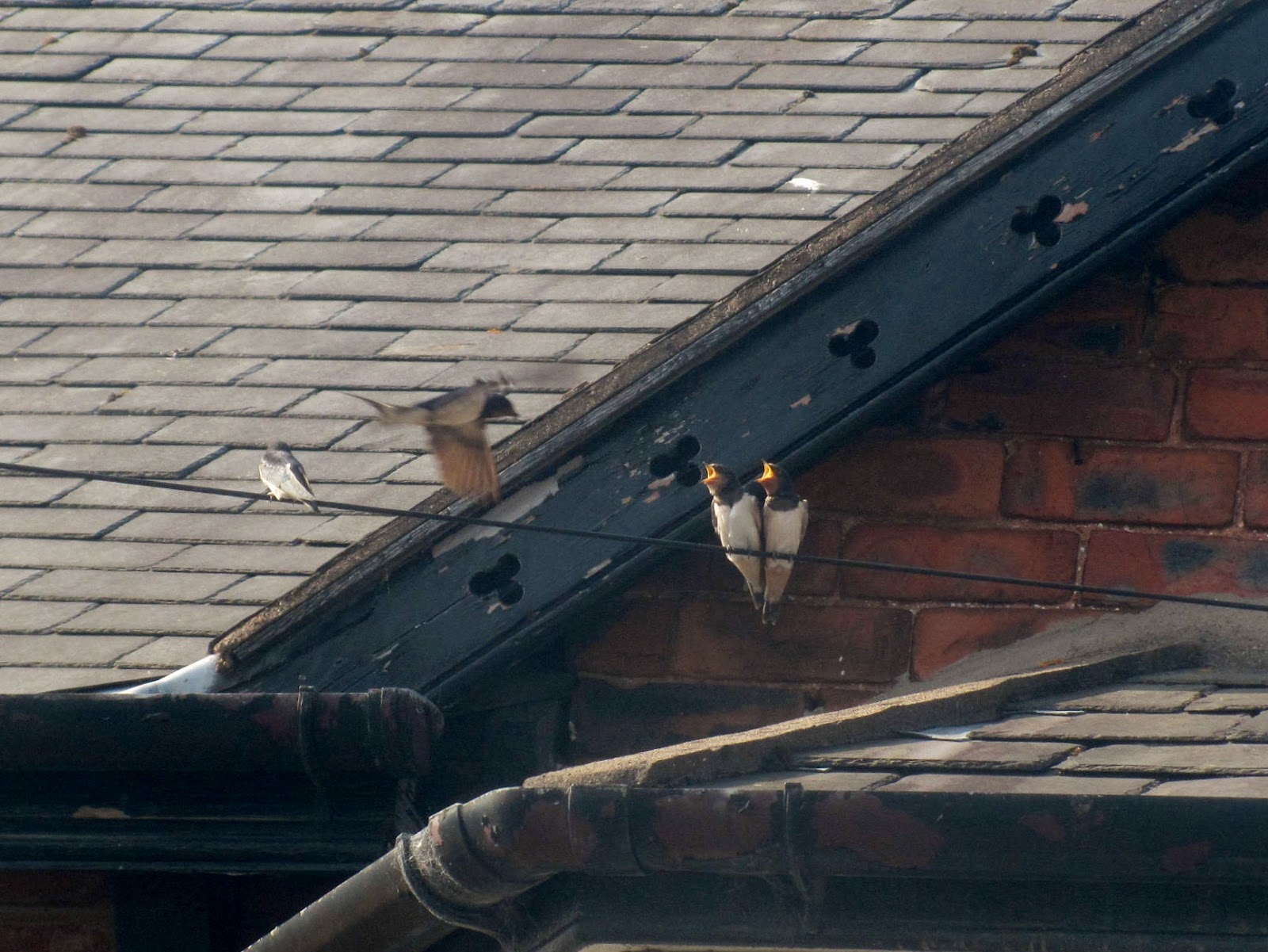 It is a dangerous time for young birds leaving the nest but perhaps this current very hot weather is a good thing for them as, if my cat is anything to go by, days are spent flopping about in the shade not stalking small creatures.  However these young swallows I spied on the telephone wires across the road the other day, do not have such worries.  Completely out of reach they were there all morning, with the parents bringing them tasty titbits every couple of minutes.  And I spent far too much time watching them instead of getting on with other things. 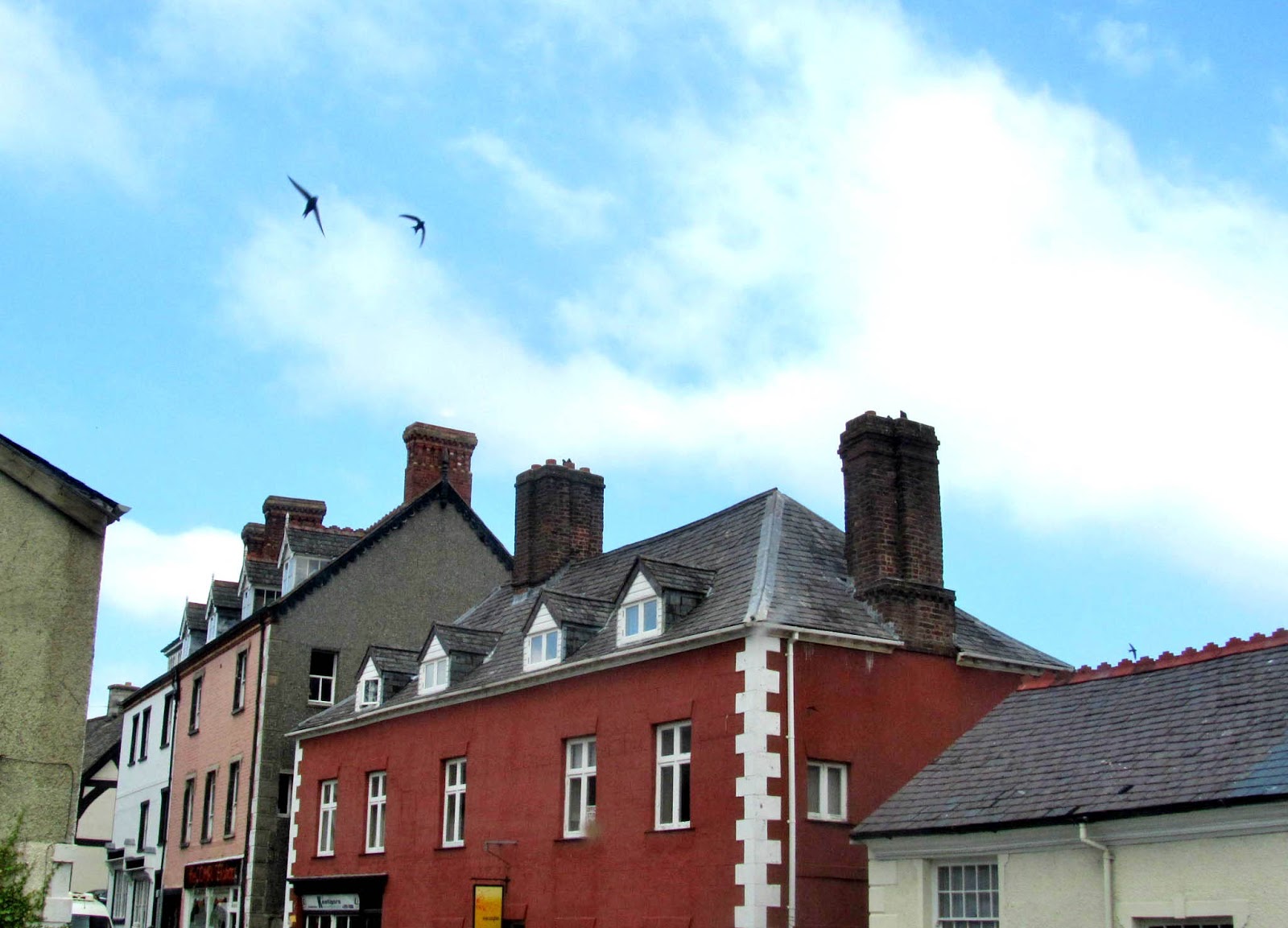 No such luxury for the swifts however.  Once they leave the nest they are on their own and are apparently ignored by their parents.  There is a large colony in the middle of town.  They return every year to nest behind this red building and have done so ever since I became aware of them some years ago.  Sadly they won't be here much longer for their long journey south will begin when August arrives.  I will miss their aerial acrobatics and the joyous screeching that is so much a part of summer in the UK.
Posted by Ann at 16:40 2 comments: 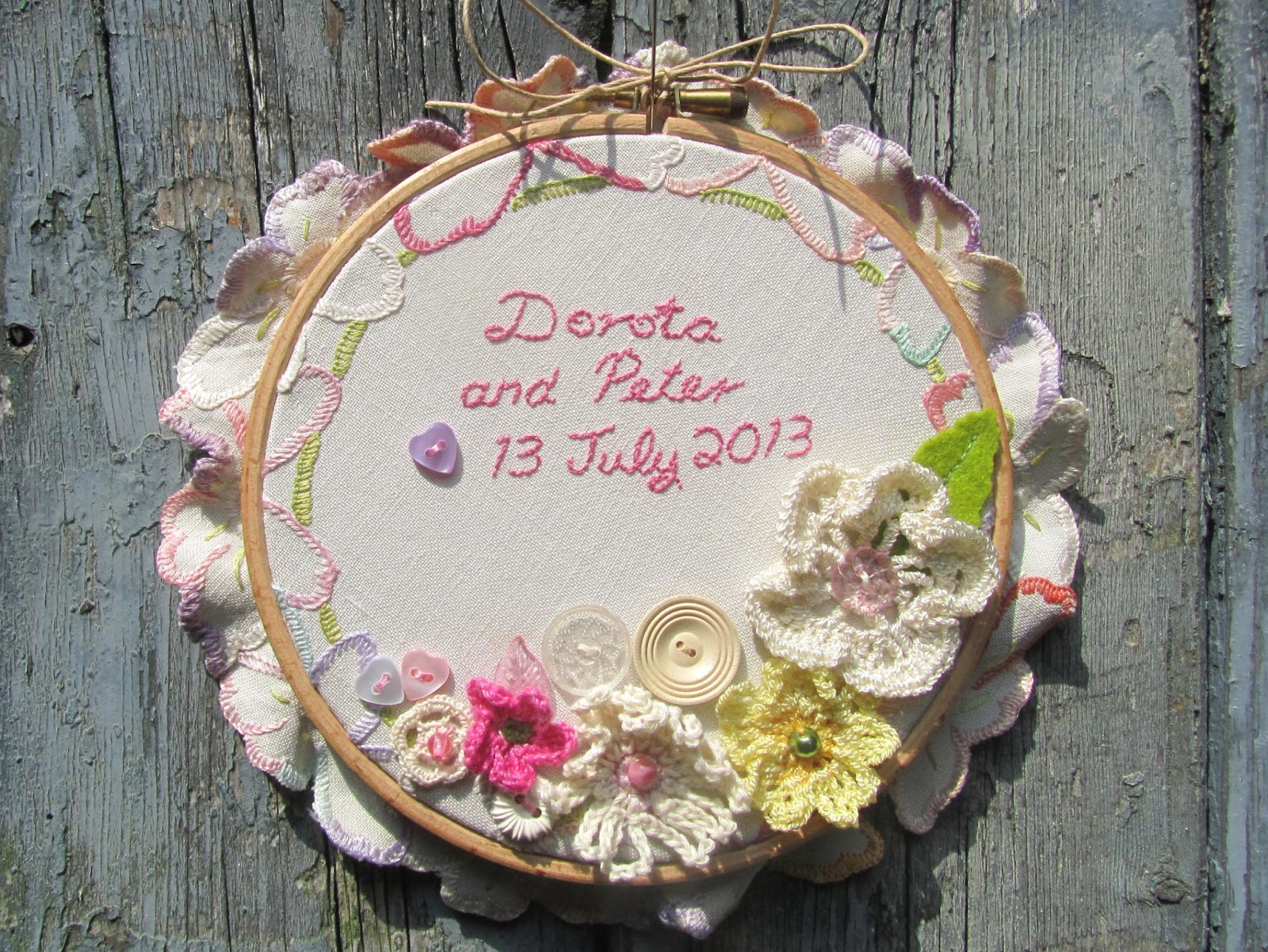 I made this wedding memento recently for a colleague.  Yesterday was her wedding day so now I can post without worrying she will see it before the day.  I was inspired by these lovely embroidered hoops from Little A Designs, though instead of cutting up one of my tablecloths I used an old embroidered doily.  I added some of my crochet flowers and buttons after stitching the happy couple's names and the date.  This would be a nice idea for a baby's birth too I think - and it just so happens another colleague is about to give birth any day now! 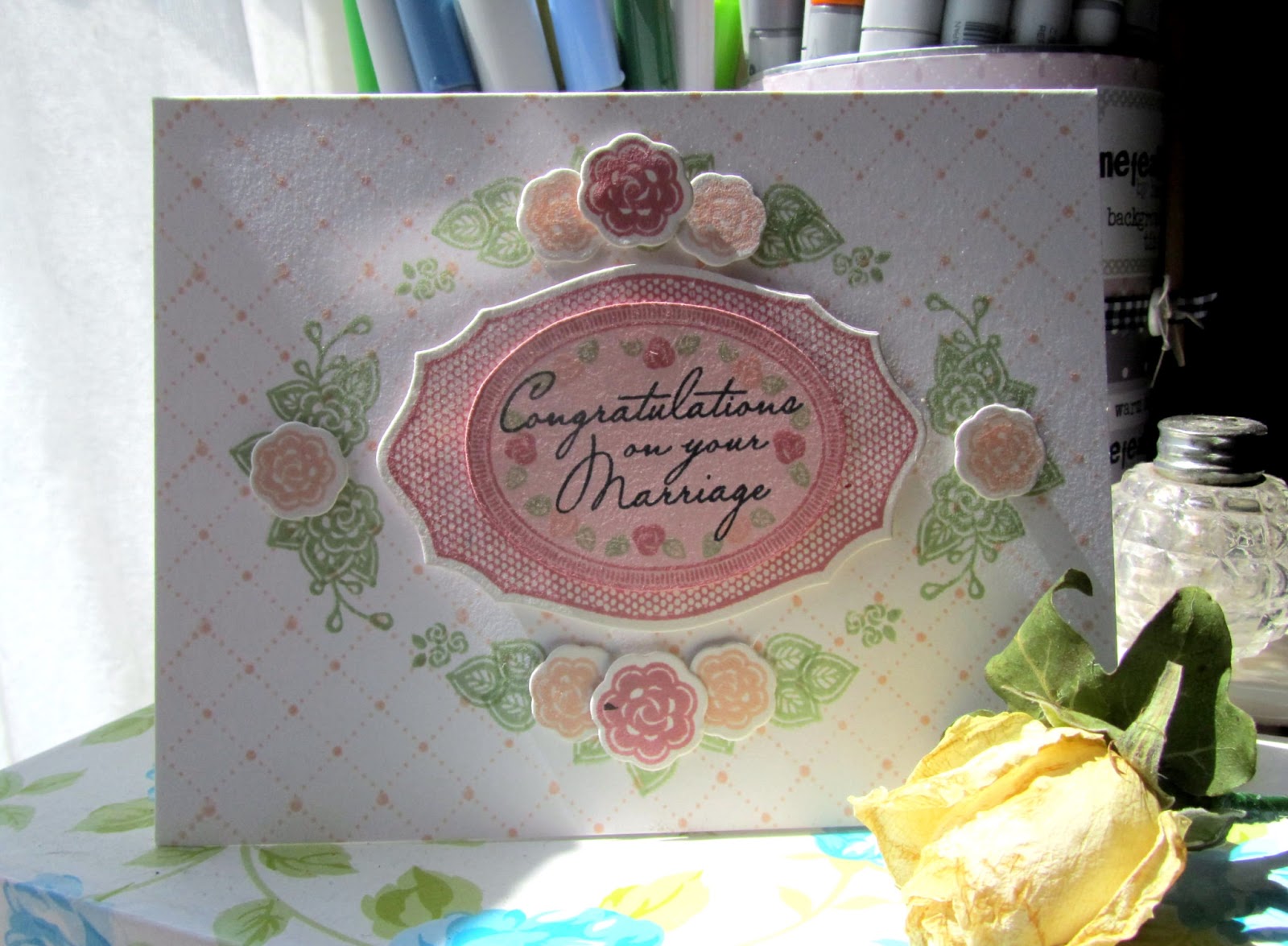 I made a card too and used my Very Vintage Florals stamp set from Wplus9, which matches up with my embroidery very nicely.  I hope Dot and Peter had a wonderfully happy day and didn't melt in the heat! 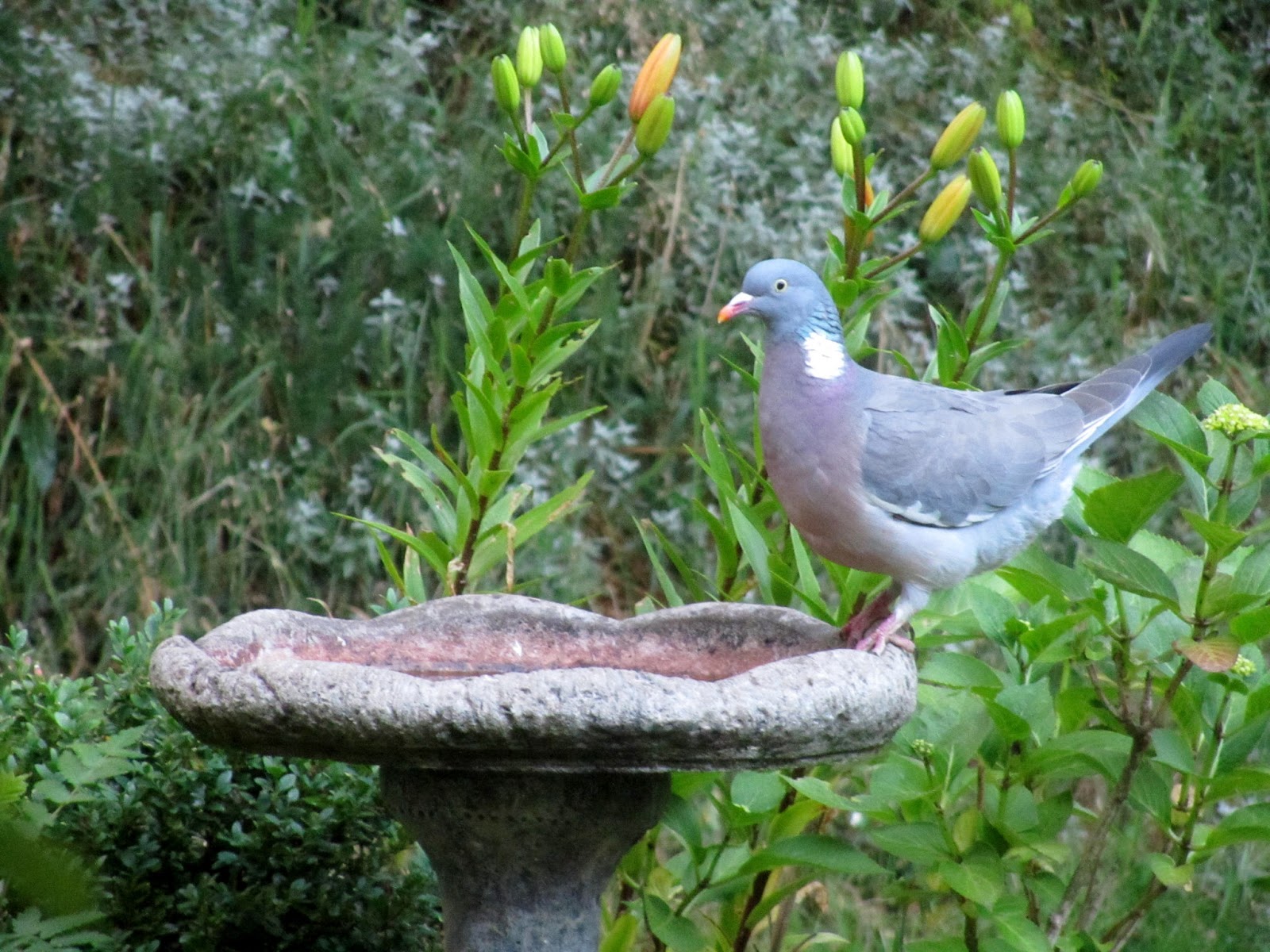 I must admit I'm finding the heat rather oppressive at the moment and look forward to a couple of hours sitting on my mother's front porch in the evening.  Watching the birds on the lawn, getting on with my crochet, and enjoying the wonderful scent of the Mock Orange (Philadelphus) each evening is a nice way to cool off after a long hot day.  And for some reason those pretty white blossoms always remind me of wedding days. 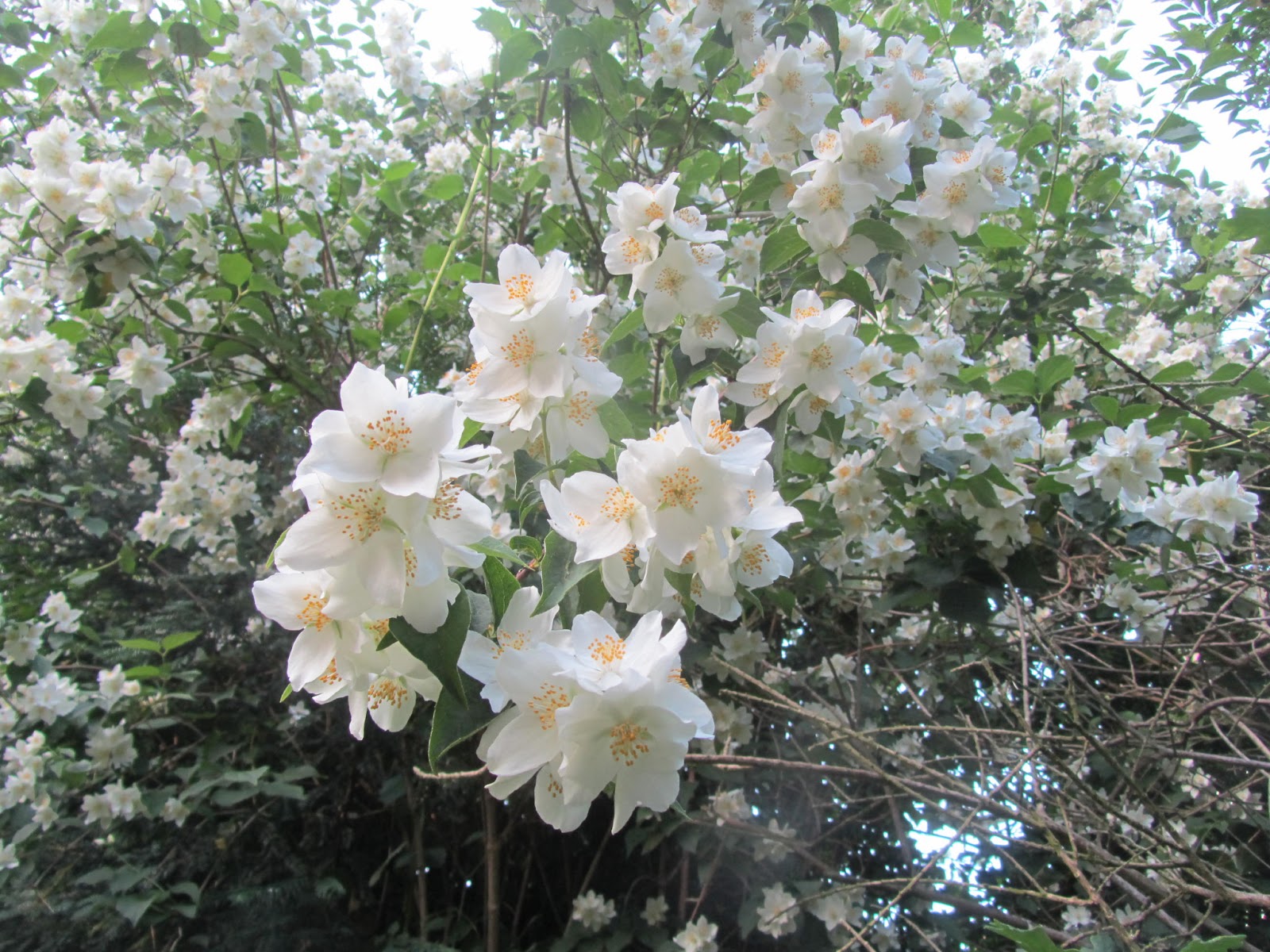 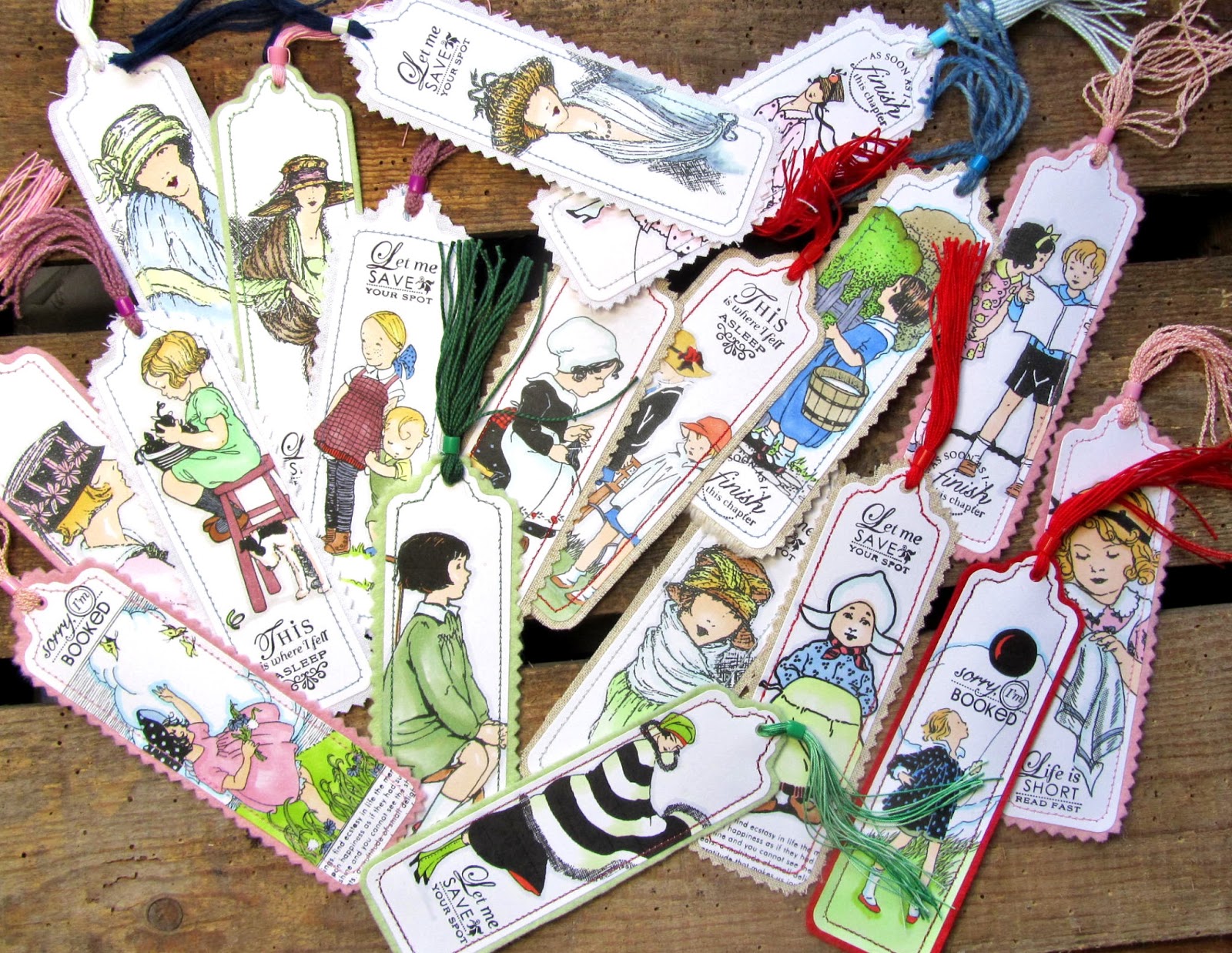 I've made these bookmarks before and they were quite popular at a previous craft fair I seem to remember.  I use images from my collection of Dover Publications copyright free books, print a few on a sheet of card, use the bookmark die from Papertrey Ink to cut out, then colour with Copic markers.  Felt or fabric sandwiched and machine stitched between two layers of cardstock creates quite a robust bookmark that can take a bit of wear and tear - travelling in a suitcase for holiday reading perhaps!
Posted by Ann at 11:27 4 comments:

A look at June 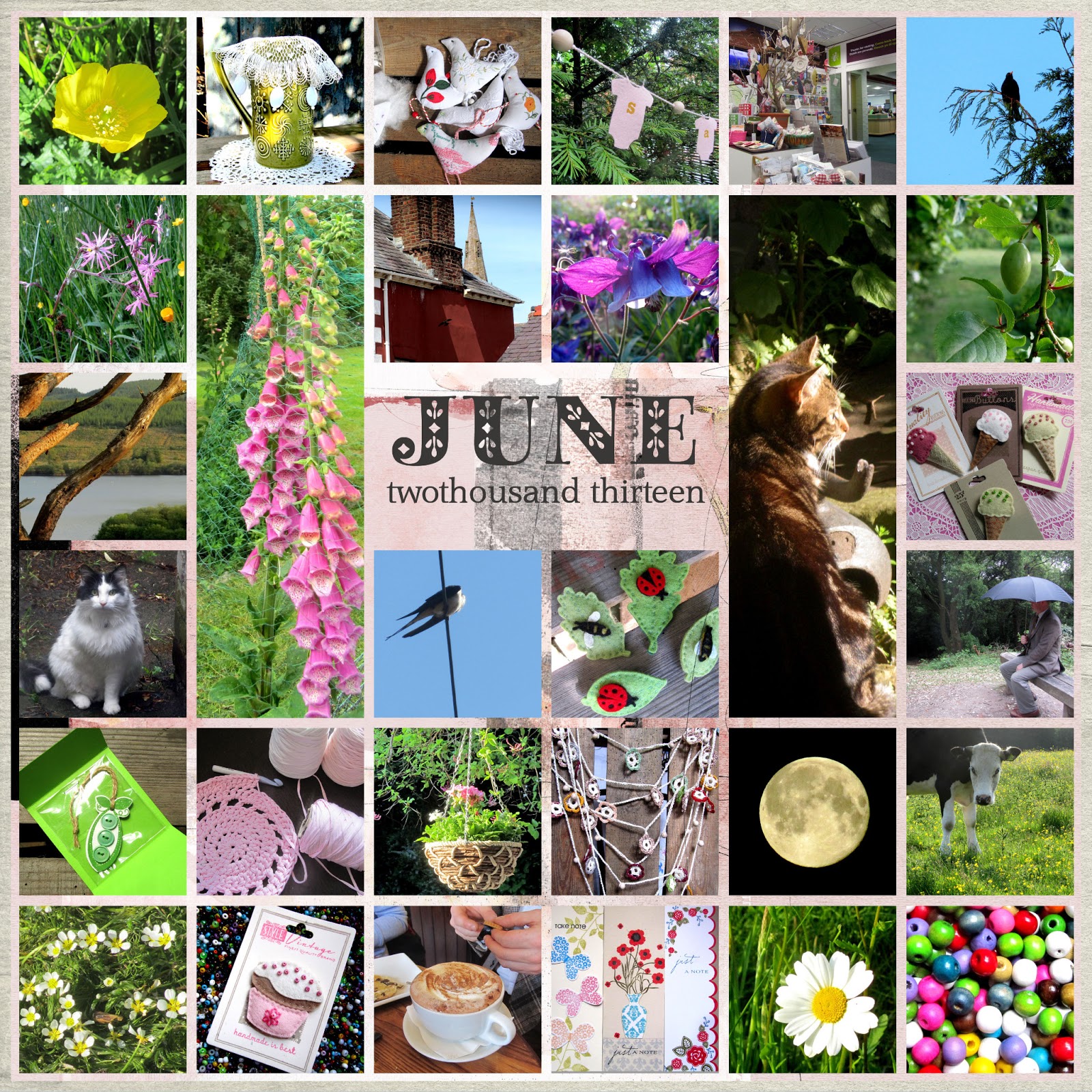 I do like the thought of signing up to photo-a-day projects like Project 365 and Capture Your 365, however I know I'm not disciplined enough stick with posting a worthwhile pic every day.  I even find it hard to keep up with my aim of posting my month remembered scrapbook pages on the last day of the month or the first day of the next!  But although filling in each of these little squares is time consuming, I am glad I've been able to stick to it for the last 18 months - a look back at the minutia of everyday life is quite enjoyable.  And here we are, half way through the year already - where does the time go!!