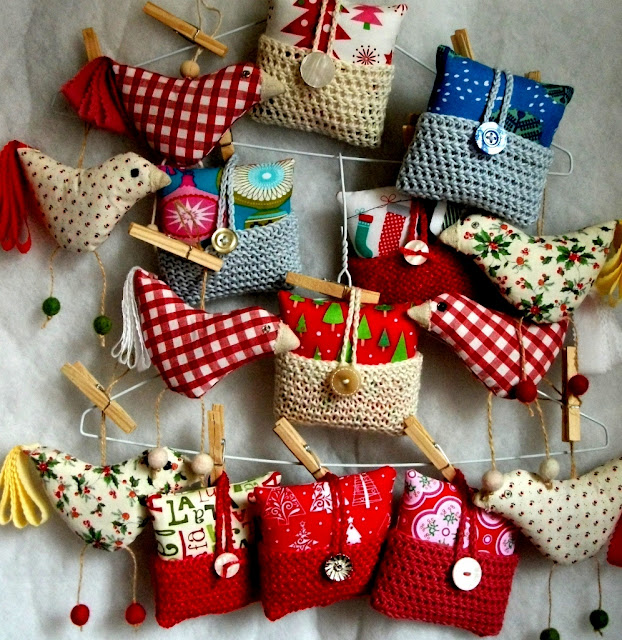 The Modern Christmas Fabric Charm Swap squares I received a few weeks ago have been such a gift this week as they turned out to be the perfect size for turning into Christmas Spiced hearts and sachets for my next craft fair. Emily at Strawberry Patch organised the swap and we swappers got 2 squares each of 26 different fabrics! And some really gorgeous patterns there were too. 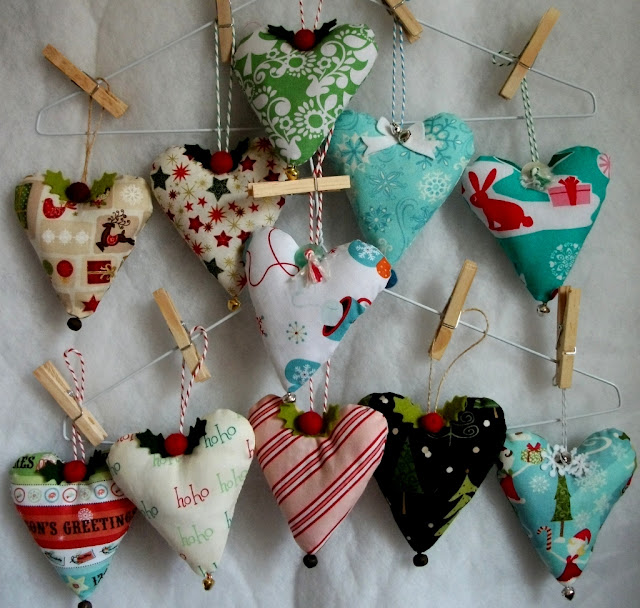 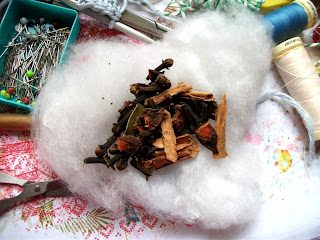 My spices are a mixture of cloves, cinnamon stick, bay leaves and star anise crushed a bit with a pair of pliers to release their wonderful fragrance - so Christmassy, I wish you could smell it.  Some old buttons, bells and felt beads add the finishing touches along with die cut felt shapes.  It all came together really well so thanks so much Emily for organising the perfect swap for me. Hope we can do it again next year. 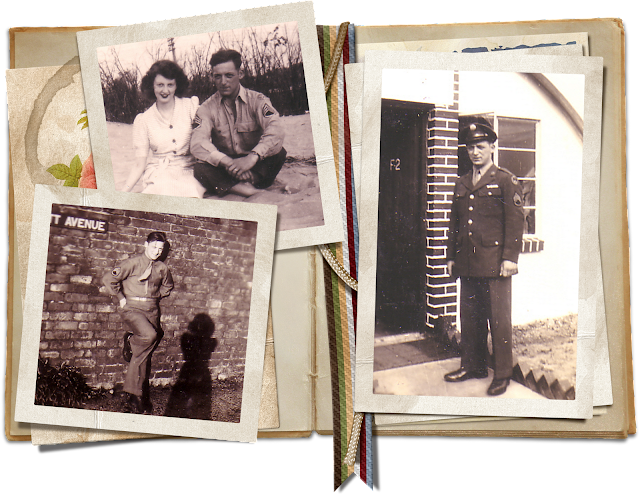 Another day of remembering and today its my Mum's wartime story I've been thinking about. I've recalled here before her romance with an American GI Jim Campbell, but I don't think I've pictured him. When I inherited my Grandmother's photograph collection I found she had kept a number of photographs of Jim and now I keep them safe. 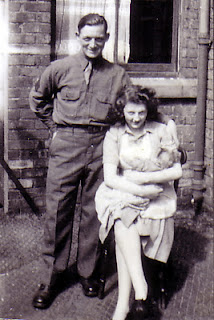 Mum was only 15 years old in 1939, living with her parents and going to secretarial school in Chester. When war broke out her Dad, my Grandfather, was working at De Havillands Aircraft Factory but was soon moved to the Burtonwood RAF base near Warrington. Then in January 1942 Burtonwood was transferred to the United States Army Airforces and the GIs came to town! By this time Mum was 17 and she and her girlfriends were in great demand by off duty servicemen who virtually took over Warrington town centre. Mum was soon "going steady" with Jim and they became engaged.  They were together for 4 years but eventually Jim left the UK for a base in Germany and Mum realised she was not destined to become a GI bride and didn't want to leave her home and family - in her own words "it was just a wartime romance".

I heard a radio programme this week recalling the experiences of over 70,000 women who sailed across the Atlantic in the 1940s to begin a new life with the American and Canadian husbands they had met and married during the war.  Today there are over a million descendants in America and Canada of the women who followed their hearts and took a leap of faith all those years ago. Funny to think I could have been one of those decendants - but I wouldn't have been me!

Jim did survive the war and returned home to Staten Island, New York.  And he did marry and have a family, so if any one 'over the pond' recognises his face I'd love to hear from you - and so would Mum!

A Host of Recycled Angels 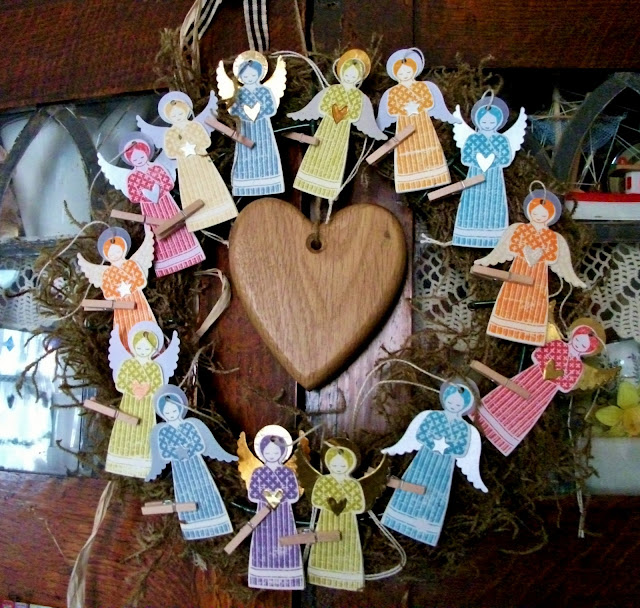 I've been busy making more and more angels this week. Although they are a bit fiddly I really enjoy creating them and like the fact that apart from a bit of white and cream cardstock, ink and vellum, they are made from the contents of my recycling box. I've used lots of cereal-type boxes, the silvery package my loose tea comes in, and the copper coloured inside of tomato paste tubes - all of which cut really easily in my Cuttlebug.  And they will hang on crochet yarn I found in a charity shop.  As this angel stamp is symmetrical it was easy to "back-to-back" the card bases and images, with the wings and halos sandwiched in the middle. 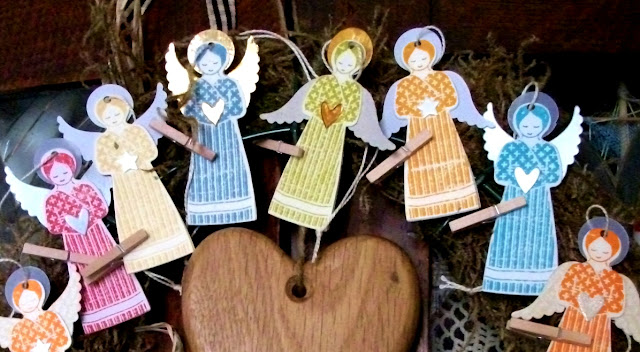 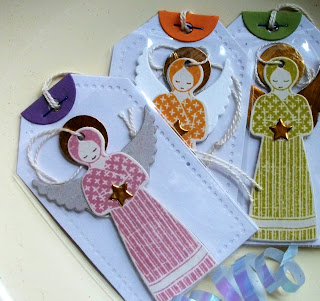 Some of these angels will be crossing the English Channel soon as my very good blog friend Baukje, a knitter and stitcher extraordinaire living in France, will be giving them to her family this Christmas. So that she can add her own greetings and messages we came up with the idea of packaging and attaching them to a tag. I've put the angels in little cello bags and stapled them to the tag top, while leaving the bag open - that way the angel will slip out easily.  I like how I was able to make up each one differently so all will get their very own angel. 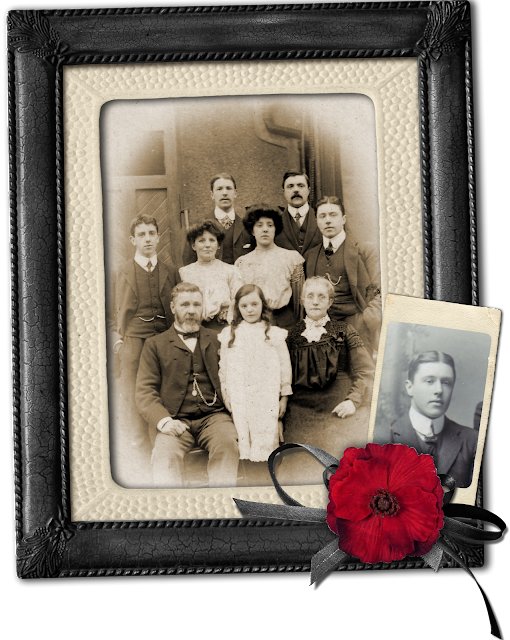 I've a passion for our family history and have become the keeper of the family album, albeit in digital form. My Mother's cousin Ieuan recently lent me his mother's old Victorian family album which contained many photographs I hadn't seen before and faces I didn't recognise.  But with a bit of detective work I was able to put names to the faces in this family portrait and turned it from just another anonymous Edwardian family photograph into a vital record of real people who I can now claim as members of "my" family.  I already knew that this little girl was a cousin of my Grandmother's and recognised also the face of her mother.  Then a search of the census records on line produced details of the whole family, which in turn enabled me to identify them all.

Today is Armistice Day - a day when we remember all those who have suffered and died in war, and of course I think of my Father and Grandfather who did not die but certainly suffered.  Their wartime experiences affected the rest of their lives.  But this year I want to remember also Thomas Glyn Owen, the young man in these photographs. He was killed on the Somme on 21st March 1918 aged 38. He left behind his grieving wife, parents, sister and brothers. He has no known grave and is remembered on the Poizeres Memorial in France, just one of over 14,300 soldiers who simply disappeared there between March and August 1918. I can't imagine the anguish of the families who had to sit at home waiting for news that never came.


Supplies: Haute Couture Embellishment digital kit from Design by Anita at Two Peas in a Bucket
Posted by Ann at 20:11 1 comment: 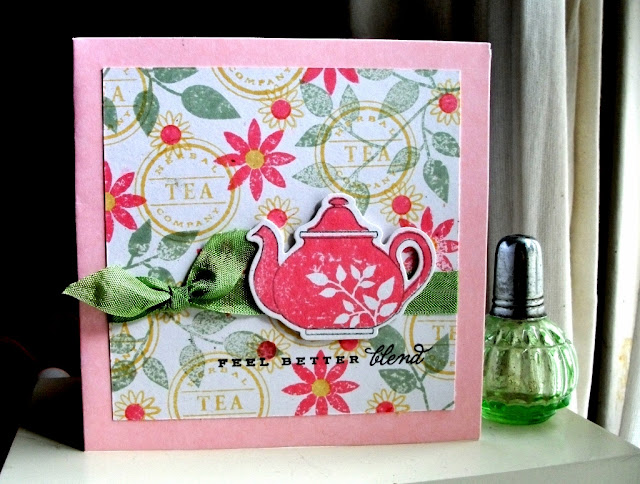 I think I've said before that I just love stamping backgrounds so this week's MIM challenge was right up my street.  I stamped this get well card for my Mum to send to a friend.  Just a short post tonight to enter the challenge.... ever the optimist! 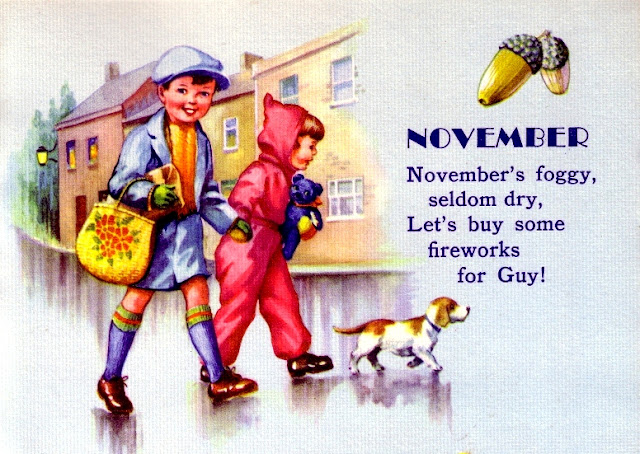 Another month and another charming image from Children Month by Month.  We don't often have foggy weather here - except when the clouds are low on the hills and we have to travel through them.  However it really doesn't seem like November - I can still walk out without a coat and the garden really doesn't know what season it is...... 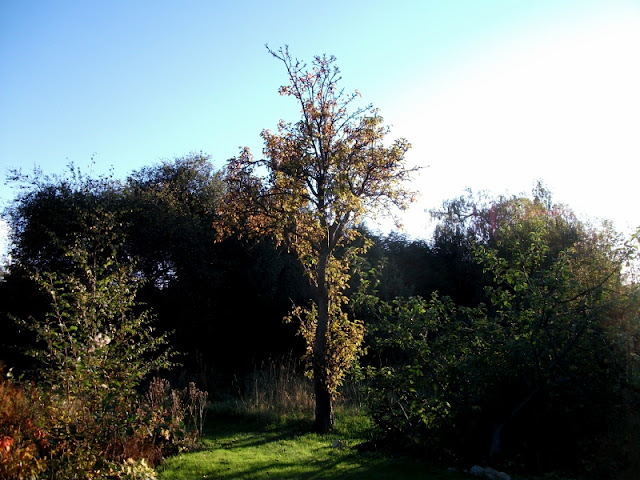 But there's no escaping the long shadows mid afternoon and dusk by teatime when lights need switching on and the curtains have to be drawn.  Oh well, I'll just enjoy the last signs of summer and get on with my Christmas crafting!