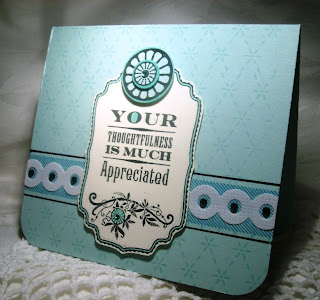 Here's my entry for the latest Waltzingmouse sketch challenge. A card for someone who has been kind on a sad occasion. I used one of the labels from the new Rescue Remedies set, masking the text and adding one of the sentiments from Rescue Remedies Additions, and turning the label upside down. 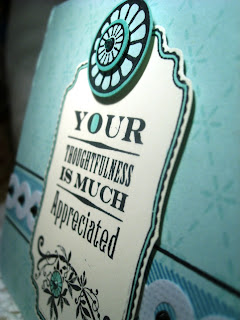 I bought the black rhine- stones ages ago and this is the first time I've thought them suitable for a card. I intended to use them on Halloween projects but we don't really make much of Halloween here so I've done nothing with them before.

Speaking of Halloween, I had a rather eerie experience the other night. It was about 2.00am and I heard this terrible unearthly screeching outside in the back garden. I thought it sounded like a crow or rook in distress, or one of the jackdaws that live in a nearby chimney. When we went outside to investigate we saw a badger running away but the screeching continued. So I fetched a torch and eventually found it was a hedgehog! 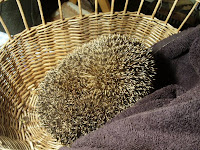 I couldn't believe the noise it was making - the badger must have tried to attack it. Anyway we took it inside and it became quiet. Although it stayed tightly curled up it didn't seem injured and after about 10 minutes we let it go. I did a bit of google-ing later and apparently badgers will eat hedgehogs if they are hungry - so I'm glad we managed to rescue this one.
Posted by Ann at 23:57